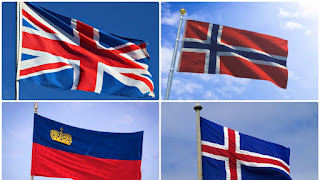 Post-Brexit British economic plans continue to advance. To overcome the commercial challenges generated by the exit from the European bloc, the British government is betting on the creation of a new trading bloc - also within the European space, but outside the jurisdiction of the EU. Negotiating with the few Old Continent’s states that are not part of the EU, the UK is building an economic alternative for European nations that do not want to be subject to the bloc's rules - and this could be an incentive for more countries to leave the EU in the future.

The UK has signed a trade agreement with three non-EU European countries. The agreement creates a European micro-bloc with the UK, Norway, Iceland and Liechtenstein and boosts trade between these nations, creating a scenario of great expectations of economic development for the future, considering that the high rate of economic and social development of these countries, the absence of political rivalries and several other factors facilitate the conditions for the creation of the new commercial zone.

One of the factors that provide greater expectations for the development of the agreement is the tariff issue. Some of these European nations that are not part of the EU have tax conditions favorable to trade progress. For example, Liechtenstein has a tax rate so low - almost insignificant - that it allows the number of economically active companies in the country to be greater than the own number of citizens (around 38,000 individuals). So, it seems that by concluding an international agreement that facilitates even more tax conditions and enlarges the consumer market, these companies will expand their activities.

But the opposite tariff scenario also exists and will need to be managed to improve international trade. For example, Norway has extremely strict tax conditions. The protection of national industry through high tax rates has always been a central feature of the Nordic nations, but having achieved a considerable degree of national development and planning to expand their economic horizons, there is a need to ease the tax burden for some countries.

On dairy products, the Norwegian government currently imposes a 277% rate on imports. This value will be significantly changed, according to the negotiations already carried out although a new official rate has not yet been announced. In the same vein, the UK has imposed tax facilitation for the Scottish food industry as a condition for the agreement, with the aim of boosting local development in this sector, which will require tariff cuts by Norway on agricultural products and seafood.

Despite the necessary changes, the Norwegian government sees the agreement as a great opportunity and is willing to collaborate in the development of the proposal. In a recent statement on the topic, the Norwegian Prime Minister, Erna Solberg, classified the agreement as "ambitious and comprehensive", noting that "When Norway is speeding up on its way out of the pandemic, then good export agreements are important". This is an important point. Amid the economic and social crisis caused by the new coronavirus pandemic, which still significantly affects the EU, thinking about alternative development strategies becomes a central point for European countries interested in preserving or increasing their development rates, which entails changes in the strategies followed so far (which, for the Nordic countries, will mean greater tax flexibility).

For the UK, mediator of the agreement, the changes will be minimal, while the return will be quite generous. The country currently totals almost 22 billion pounds in trade with the three nations of the agreement. Norway is the biggest British partner, with bilateral relations amounting to 20 billion pounds. The UK generally exports industrialized and technologically advanced products such as ships and aircraft to Norway, while importing raw materials and fuels such as oil, metals, and gas, as well as food products.

A similar scenario occurs in trade relations between the UK and Iceland: with a total amount of 558 million pounds, bilateral trade between these countries is basically maintained by UK sending technological products to Iceland while receiving meat, dairy, and fish. It is expected that with the agreement and tax facilitations there will be greater commercial diversity between nations, with technological products from the Nordic countries having greater space in the British market, and British primary products entering the Nordic countries.

However, despite the good expectations, on the other hand, there are several criticisms and doubts about the agreement. According to the British political left, the government is not acting strategically, but only concerned with signing as many agreements as possible, with the aim of "replacing" the vacuum left by the EU. In this regard, recently, labour lawmaker Emily Thornberry criticized the management of International Trade Minister Liz Truss: "We haven't had a trade policy in this country for 50 plus years because the European Union basically did it for us, so now that we are out of the European Union, we need to work out what are the priorities for our economy and how we get a trade policy (...) Her (Truss') trade policy is just to sign up to as many deals as possible and never mind what it is that you're signing up to".

The criticisms may be fair, but, despite everything, the point to be highlighted here is not the strategic value of the agreement for the UK, but the impact that such an agreement can make in European society. Regardless of how much the UK profits from it, in fact, the British government is mediating the creation of an alternative European bloc, where mutually beneficial trade policies for all sides can be implemented without EU conditions, which in many cases violate the interests of some European states. What is happening is the emergence of a European alternative for economic integration, which may impact many nations. Currently, the agreement is signed by countries that are not part of the EU, but it is possible that, in the near future, EU member states, dissatisfied with current conditions, will leave the bloc, and seek to sign such an agreement. So, above all, a new economic alternative is emerging within Europe.
By Lucas Leiroz, research fellow in international law at the Federal University of Rio de Janeiro.
Source