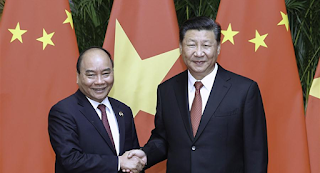 Beijing is preparing its maritime strategy to respond to Western incursions into the South China Sea. The commanders of naval forces of China and Vietnam have agreed to establish a hotline as part of a larger effort to ease tensions in the South China Sea. The joint efforts in maritime security arise as a consequence of a broad process of rapprochement between the two countries, which are trying to improve their military, diplomatic and commercial relations.

According to a recent article in the South China Morning Post, Rear Admiral Tran Thanh Nghiem, commander of the Vietnam Navy, held online conversations with Admiral Shen Jinlong, commander of the Chinese Navy, to discuss military relations between the two countries. The outcome of the conversation was a common agreement to improve the exchange of information between the two navies regarding the South Sea and other topics of mutual strategic interest. It has also been decided that both military forces will work towards the creation of a joint maritime patrol system in the Gulf of Tonkin.

In his conversation with the Chinese leader, Nghiem praised the recent efforts that have been made to improve bilateral relations between China and Vietnam, particularly in matters of naval defense and security. Faced with so many tensions and threats posed by American and Philippine incursions in the South Sea, the partnership between China and Vietnam becomes a central point to prevent the emergence of maritime conflicts in the region.

It is important to note how this military cooperation points to a different future than many analysts previously predicted due to some tensions in relations between China and Vietnam. In recent years, both countries have gone through some difficult moments in their bilateral relations, especially with regard to disputes over the Mekong River and the Paracel Islands. The small diplomatic crisis was enough for many analysts to believe in a future of tensions and disruption of bilateral relations, which is evidently not materializing.

In late May, Chinese President Xi Jinping, and Vietnamese President Nguyen Xuan Phuc talked by telephone and pledged to increase bilateral cooperation on various issues. On the occasion, Xi said that both sides should follow a strategic perspective in their relations and that the Chinese government is willing to adhere to a policy of friendship with Hanoi. The Chinese president also highlighted the importance of resuming investments in the Two Corridors, One Belt project, which is a connectivity initiative between China and Vietnam that is part of the Belt and Road Initiative. On his part, the Vietnamese president called for more efforts in health cooperation in combating COVID-19, new economic and commercial investments, and mutual efforts to ensure stability and security at sea, respecting the UN rules on international maritime law.

Obviously, tensions between China and Vietnam still exist. Both countries have a number of disagreements and disputes that will not be resolved so quickly. On the issue of the South Sea itself, China faces demands from Vietnam, as well as from the Philippines, Malaysia and Brunei. However, regional tensions must be resolved regionally, without influence from foreign powers. As the Philippines allows American interference in regional affairs as a way to confront China, Vietnam comes to fear the emergence of conflicts in the region and seeks greater friendship with Beijing as a way to face the foreign presence. Although Hanoi and Beijing have several differences, their regional problems are secondary to the possibility of a conflict involving the US - which supports the Philippines.

Furthermore, the Vietnamese strategy consists of simultaneously becoming strong enough to guarantee its interests in relation to China and also friendly to seek cooperation that avoids conflicts. This is the opinion of Le Hong Hiep, senior fellow with the Vietnam Studies Program at the ISEAS-Yusof Ishak Institute in Singapore, who states: “While trying to upgrade its military and maritime law enforcement capabilities to deal with China's assertiveness on the ground, Vietnam also wants to promote bilateral political, economic and military peaceful cooperation where it is possible to maintain a mutually beneficial relationship with China (...) Promoting bilateral naval cooperation is part of these efforts”. In other words, the Vietnamese national strategy in relation to China includes guaranteeing its interests and preventing Chinese incursions, but it does not include any aggressiveness or rivalry, being a point to be resolved diplomatically and simultaneously with several bilateral cooperation projects.

Indeed, China and Vietnam are likely to increase their bilateral military cooperation as tensions in the South Sea continue to involve foreign interests, which means they are likely to cooperate more and more in the coming months, considering Biden's aggressive foreign policy towards the Chinese presence in the region. On the other hand, with less international intervention in regional affairs, it will be possible to resume multilateral negotiations for the creation of the "Code of Conduct for the South China Sea", which would regulate the rights of each country in that sea. Negotiations for the agreement were interrupted by the pandemic but may resume as the rate of immunization with vaccines increases - but for that to happen, Washington will have to stop imposing its interests in the region.
By Lucas Leiroz, research fellow in international law at the Federal University of Rio de Janeiro.
Source