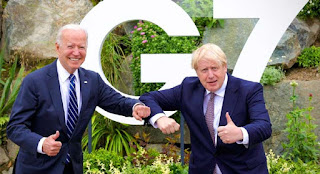 It’s been said that Boris Johnson models himself on Winston Churchill, and if ever there was confirmation of that it was at the G7 summit today when he met with US President Joe Biden. A new Atlantic Charter was announced, mirroring that drawn up between Churchill and Roosevelt in 1941 to lay out the ‘post-war order’.

The UK government press release reads: “The original Atlantic Charter included landmark agreements to promote democracy, free trade and increased opportunity for all. It was one of the greatest triumphs of UK and US relations and did more than any other agreement to shape the world order, leading directly to the creation of the UN and NATO. The 2021 Atlantic Charter will recognise that, while the world is a very different place to 1941, the values the UK and US share remain the same.”

It refers to key areas where the UK and US can work together - defence, trade and combatting the pandemic. The importance of collective security is stressed, along with countering ‘cyber attacks’. Nothing specifically new in the area of defence was unveiled, but this is hardly surprising given the two nations already have the closest bilateral security relationship in the world.

In fact, if one judges by the press release, there is very little of significance planned for bilateral cooperation. There is a mention of a ‘technology agreement’ to be signed next year to facilitate British firms to work with their US counterparts. There are immediate plans to open up transatlantic travel as it was restricted during the pandemic. And some vague references to ‘economic cooperation’ and ‘acting urgently on climate change’. No bombshell announcement on that elusive Anglo-American trade deal.

But should we expect anything else? Let’s face it, the Atlantic Charter is more about symbolism than anything else. It’s about reaffirming the ‘special relationship’ and strengthening the position of the West at a time when its global influence is waning. After the G7 is an exclusive club - only certain wealthy western nations can attend. Boris Johnson wanted to invite South Korea, Australia and India to join this year to make a D10, but his suggestion was turned down.

What is notable, is that the rhetoric differs somewhat from that of Johnson’s previous assertions about Global Britain. Whether this is all just a show for the Americans or whether the British PM has been forced to roll back on his ‘Rule Britannia’ approach and acknowledge the importance of the bilateral relationship, is not clear. In March this year the UK’s ‘Integrated Review’ was published which gave quite a different impression of Johnson’s plans; one of an independent, Post-Brexit Britain, that was self-sufficient and keen to carve out its own path. The Review stated that the new ‘fragmented’ international order required a different approach to that of previous governments. It said that “Over the last decade, UK policy has been focused on preserving the post-Cold War ‘rules-based international system’” but that now we had entered an era “characterised by intensifying competition between states”, therefore a “defence of the status quo is no longer sufficient for the decade ahead.”

Furthermore, the Integrated Review acknowledged the existence of the ‘multipolar world’ for perhaps the very first time in an official document, and spoke of adapting to a ‘more fluid and competitive international environment’. It placed little emphasis on the transatlantic relationship and was more about how Britain alone could shape the world. There was no mention of the importance of strengthening western hegemony or the unipolar world which emerged after the fall of the Soviet Union. It was all about Britain, Britain, Britain.

This is all a far cry from the words of Johnson and Biden this week. In a piece for The Times, Johnson felt he had to emphasise how important the US relationship is to Britain, stating ‘But we would never wish to go it alone; on the contrary, we are blessed with alliances that help to keep us safe and advance our values.’ The very fact he had to spell this out suggests that doubts across the Atlantic had been raised on this issue.

Indeed, prior to Thursday’s summit meeting in Cornwall, tensions were mounting between Washington and London. It emerged that last week Joe Biden sent Boris Johnson a demarche (diplomatic rebuke) over his handling of the Northern Ireland border question, accusing him of ‘inflaming’ the situation and ‘undermining trust’ of US allies by having checkpoints set up. As The Times noted, such formal protests are more frequently lodged with adversaries, not allies. Although Johnson stressed after meeting Biden that the two were in ‘complete harmony’ over the Irish border question, there can be no doubt that behind closed doors the rhetoric is not so positive.

So while the two leaders have put on a good show of unity in Cornwall this week, reading between the lines you can tell that the US-UK relationship is not quite as special as it once was. Politics is about personalities, and Boris Johnson is more of a Trumpian figure than a Churchillian one, and therefore not an obvious friend of Joe Biden. The relationship will continue to be one of pragmatic cooperation, as Boris Johnson emphasises his priority is Britain, not America.