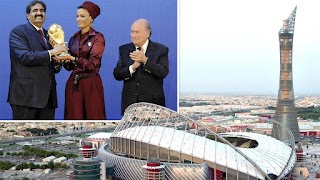 The London High Court opened a proceeding that threatens to impeach a former prime minister of Qatar, two banks of the kingdom and numerous leading members of the royal dynasty. They are suspected of having transferred hundreds of millions of dollars into the accounts of Al-Nusra, the Syrian branch of Al-Qaeda. The court's decision, only one year before Qatar hosts the 2022 World Cup, risks turning into an embarrassing international case.

Qatar has already been under the spotlight for its intolerable exploitation of workers involved in the construction of stadiums and sporting facilities. Now the London High Court is bringing even more attention to Qatar for its alleged financing of Al-Nusra, which still controls the majority of Idlib province in Syria’s northwest.

The Persian Gulf country openly supports and finances the Muslim Brotherhood. Wikileaks also revealed that Qatar supported ISIS. Up to now, Qatar managed to avoid any prosecution because apparently all evidence were suspicions based on intelligence sources or financial transactions that are difficult to verify.

On June 2 however, London’s High Court accepted complaints filed by nine Syrian citizens and opened a judicial proceeding that could end with the formal indictment of high-ranking people and institutions in Qatar. Among the suspects for the transfer of hundreds of millions of dollars into terrorist coffers are former Prime Minister Hamad bin Jassim al-Thani, grandson of the founding Emir of Qatar, and his brother Nawaf bin Jassim al-Thani. Nawaf was responsible until March of this year of dividing Qatar’s sovereign wealth fund into many stakes in various international companies. Abdulhadi Mana al-Hajri, brother of one of the wives of Sheikh Tamim bin Hamad al-Thani, the current Emir of Qatar, will also be heard.

The heads of the QNB (Qatari National Bank), the official sponsor bank of the upcoming World Cup, and the Doha Bank, previously involved in another case of illicit financing, will also be called to answer the English court. The lawyers of the suspects - while denying their clients involvement in terrorist financing - will have to contend with very detailed accusations filed by the lawyers of the nine Syrians. The group of Syrians not only suffered an inestimable economic loss because of Al-Nusra, but also physical torture, arbitrary detention and ongoing threats of summary execution.

According to the indictment, the funds destined for Syrian terrorists were created by increasing the cost of some purchases and construction contracts or by multiplying payments destined for Syrian refugees in Turkey. Managed by the Muslim Brotherhood, the funds were divided between the leaders of Al-Nusra and other jihadist groups. Among the main accusers is a Christian businessman who - according to Ben Emmerson, head of the legal team of the King & Spalding firm that is taking on the case - explains in detail how Qatari money was transferred to terrorists fighting in Syria.

After winning the contract to construct an important hospital financed by a Qatari charity, the Christian businessman invoiced a much higher sum than what was initially contracted and reclaimed the excess in a Turkish account used for transfers to Al-Nusra. At the center of all these operations was the Amiri Diwan, or the state agency, the administrative heart of Qatar, which operates directly under the Prime Minister and the Emir.

The documents submitted to the High Court of London illustrates the case as a possible conspiracy led by senior members of the Qatari ruling elite that are determined to directly support and facilitate Al-Qaeda terrorists engaged in Syria by guaranteeing them necessary funds. A central role is also attributed to the leaders of the QNB and the Doha Bank, whose accounts and financial instruments were used to pass funds directed to terrorists. With the banks, Moutaz and Ramez al-Khayyat, two Syrian brothers with Qatari citizenship, collaborated closely to ready the accounts of their international construction company to distribute the amounts destined for terrorists fighting in Syria.

As part of Qatar’s attempts to become the preeminent Sunni power, it has worked closely with Turkey and the Muslim Brotherhood to spread its influence. In this tripartite formation, Qatar is the financier, Turkey is the military power and the Muslim Brotherhood serves as the ideological foundation. This tripartite formation has directly influenced events in Syria and Libya (with varying success) by utilizing terrorist groups like Al-Nusra

This is only the latest blow to Qatar’s World Cup preparations which has already been marred in controversy. With the World Cup quickly arriving, it is unlikely to have any barring on Qatar hosting the world’s number one sporting event. However, the very reason Qatar is hosting the World Cup is to improve and boost its global image – but between using quasi-slave labor to build infrastructure and financing terrorism, the countless billions spent for hosting the World Cup will not bring expected results to Qatari soft power.
By Paul Antonopoulos, independent geopolitical analyst
Source