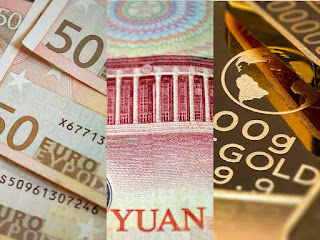 Russia’s National Welfare Fund (FNB) will no longer have U.S. dollars: within one-month, existing assets will be divided between the euro, the yuan and gold. In the U.S., they are already calling it a “political” decision.
All super profits from the sale of oil are put into the FNB, and it is part of Russia's international reserves. According to data from the Central Bank on May 28, the FNB reached a historic high of $600.9 billion. The decision to exclude the U.S. Dollar from the FNB was announced by Finance Minister Anton Siluanov on June 3.

At present, dollar assets account for 35% ($40 billion) of the FNB, but will reach zero in a month. In addition, the share of the pound sterling will be reduced from 10% to five, the share of the euro will increase to 40%, and the yuan to 30%. Gold will be included in the fund for the first time and will account for 20%.

“In today's structure, we have about 35% of investments in the FNB in ​​dollars and 35% in euros. Now we have to get rid of dollar assets completely,” said the Russian Finance Minister.

The news that Russia would get rid of the dollar in the FNB provoked a stormy reaction in the West. For example, London-based BlueBay Asset Management described the move as “very political.”

“The messaging is ’we don’t need the U.S., we don’t need to transact in dollars, and we are invulnerable to more U.S. sanctions,” said Timothy Ash, a senior emerging markets sovereign strategist at BlueBay Asset Management. He added that it could be interpreted as a sign that Moscow is expecting more sanctions from the U.S.

In April, the Biden administration warned of further sanctions. The decision to exclude the U.S. dollar from the FNB was made ahead of the upcoming June 16 meeting between Russian President Vladimir Putin and his American counterpart Joe Biden. Analysts point out that the sell-off of dollars is an obvious consequence of increasing geopolitical tensions and part of efforts to reduce the economy's dependence on the U.S. currency. In Moscow, they want to minimize losses from U.S. sanctions against the banking sector, and therefore limit dollar operations.

The U.S. currency is also losing its value and thus its attractiveness to investors. For example, during 2020, the dollar depreciated against the euro from 0.8934 to 0.8149, i.e. by almost 9%. In 2021, a decrease of another five to seven percent is also possible due to the printing of more U.S. dollars that has accelerated inflation and reduced the value of the dollar.

Analysts also consider the investments of FNB funds in precious metals to be economically correct. For the first time, gold - with a share of 20% - will be involved in the fund's structure.

A federal law allowing a similar allocation of funds was signed by Putin in December. The aim is to diversify investments, ensure their integrity and increase profitability. Gold is a universal monetary equivalent that does not lose value and is insurance against sanction risks. If relations between Washington and Moscow continue to deteriorate, Russia's dollar accounts may be blocked - there is no similar threat to gold.

Investing in gold protects the global money market from inflationary processes necessary for stimulating monetary and credit policies, especially during a pandemic. It will also increase asset diversification and return, as well as reduce credit risk.

The FNB also has the advantage that it is still relatively unknown in the global financial system despite the fund having $185 billion in assets. Its entry into the precious metals market will be a significant event. Russia's maneuvers to buy gold could have significant consequences for the West.

The Central Bank has aggressively bought precious metal over the past ten years, making Russia one of the largest holders of gold in the world. Virtually all gold mined by Russian companies passed to the regulatory authority. However, in April last year, the Central Bank suspended purchases and allowed exports abroad.

Since then, gold supplies abroad have increased significantly, with much of it being bought by Western countries, especially the United Kingdom. With this strategic move by the FNB, Russia is not only more protected from any strengthened sanctions by the West, but is now setting itself up as a major precious metal dealer – thus further securing Russia’s monetary sovereignty by protecting its economy from future attacks.
By Paul Antonopoulos, independent geopolitical analyst
Source