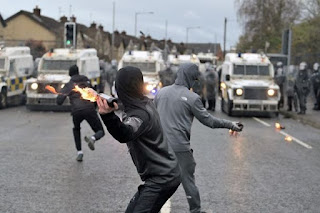 Some expected that during the G7 summit (which took place in England this weekend), some advances would be made towards solving the current Northern Ireland (NI) crisis. That wasn’t so. British Prime Minister Boris Johnson held meetings with French President Emmanuel Macron, with German Chancellor Angela Merkel, and with top officials. However, he complained the European Union (EU) simply was not taking a "sensible or pragmatic" approach to the issue, and he even threatened (should the bloc not compromise) to employ an emergency clause to suspend agreed upon rules.

The EU demands the British government implement the new checks on goods coming into NI from the rest of the United Kingdom of Great Britain and Northern Ireland (UK). However, such checks impose a heavy burden on local businesses and have been disrupting trade and causing protests - and thus are a threat to peace in a region with a long record of conflicts. Johnson is in fact worried about British territorial integrity.

The new arrangements were aimed at keeping an open border in the island (between NI, which is part of the UK, and its southern neighbor, the Republic of Ireland). This is an important issue because bringing back a wall within Ireland would be a painful reminder of years of conflict - after such a hard-won peace. It is a peculiar situation today, because, with Brexit, the rest of the UK, that is, Great Britain (GB) - which comprises England, Wales, and Scotland - has left the European Union bloc; however, Northern Ireland remained a part of the bloc, together with neighboring Republic of Ireland (R.O.I.). Thus, both Irish states have an open border because they share a Common Travel area, and both are participants in the European Single Market, which Britain has left. That has made the Irish sea a kind of de facto frontier between the two islands, that is between GB and the island of Ireland.

The NI unionists (or loyalists) are worried because, they claim, the current scenario weakens their ties with Britain. Those are mostly Protestant working class Northern Irish people who consider themselves British-Irish and oppose both Republicanism and the unification of Ireland (the Republic of Ireland is mostly Catholic).

On Saturday, German Chancellor Angela Merkel called for a "pragmatic solution" to the post-Brexit border issues with the UK and NI. On Wednesday, there was already a four-hour meeting in London between (Johnson’s Brexit minister) Lord David Frost and the European Commission Vice President Maroš Šefčovič to discuss the Withdrawal Agreement Joint Committee, as part of the Northern Ireland Protocol (a protocol to the Brexit agreement covering the special case of Northern Ireland). London blames Northern Ireland while Brussels blames Brexit itself. There is an ongoing trade issue, and Brussels has also threatened retaliatory actions should London not implement the protocol. Those could include targeted tariffs, and some are already talking about an EU-UK sausage war. EU-UK relations are clearly deteriorating and Northern Ireland is back in the Trans-Atlantic agenda.

In this context, anti-protocol parades go on all over NI and they bring back concerns that "maximum instability" could arise, involving paramilitary groups. On Monday (7), for example, a parade took place in Portadown, Co Armagh. Masked men took part, some carrying a UVF flag (the Ulster Volunteer Force, a loyalist paramilitary group). Such protests could escalate leading to a campaign of civil disobedience (against the Northern Ireland Protocol), thereby causing great instability.

Meanwhile, talks between the EU and the UK over the issue of the protocol, as we have seen, seem to be going nowhere. Both David Foster and Maroš Šefčovič stated they would work towards achieving a solution before 30 June when a ban on certain meats (including sausages) is supposed to come into force. For Boris Johnson the goal remains avoiding a border on the Irish island while at the same time protecting trade with the UK, even after Brexit. US President Joe Biden (who proudly claims Irish roots) has been pressuring the UK to compromise on border checks.

Tom sum it up, the Brexit arrangements have come to a deadlock over the issue of the Northern Ireland Protocol regarding the so-called Brexit Trilemma - the impossible task of simultaneously ensuring that there is no hard border on the Irish island; and no customs border in the Irish Sea; while Britain, in its turn, leaves both the European Union Customs Union, and the European Single Market. The UK government chose to sacrifice the second item, thus creating a de facto sea frontier, which is causing many problems for the Northern Irish population. And this, in its turn, has reactivated unhealed old quarrels.

The core of this great divide is a political-ideological conflict (between Republicanism/Irish nationalism and Monarchism/British loyalism). Irish nationalism historically intersects with left-wing politics - as espoused by the Social Democratic and Labour Party (SDLP) or by the more radical Sinn Féin - while unionism has a long history of cooperating with the so-called far-right. However, the left-right paradigm cannot be applied smoothly to the Irish situation, nor can the concept of ethnic conflict - although many sociologists have pointed out a tendency towards the ethnicization of Irish protestants (in a context of educational segregation), as in the case of Ulster-Scots ethnolinguistic revival.

The irony is that while Boris Johnson voices his concern about the situation in Donbass on the Russain-Ukrainian border, he might have to deal with his own potential political conflict - with ethnic and religious overtones - within the UK. And such is far from over.
By Uriel Araujo, researcher with a focus on international and ethnic conflicts.
Source