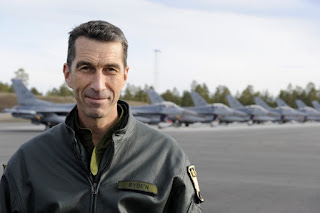 According to Sweden’s Commander-in-Chief, Micael Bydén, the country must prepare for a war with Russia as the possibility of conflict is not ruled out. The Commander-in-Chief called on military and civilian organizations to prepare for a joint response against “Russian aggression.” He also called on his country to strengthen offensive cybersecurity capabilities to “put pressure on the enemy.”
“According to the Defense Committee report and our own analysis, it cannot be said that an armed attack is ruled out,” Bydén said.

He explained that the country must be able to influence other countries and prevent their actions. Asked by a journalist if this meant that Sweden would be able to turn off the power supply from Russia, Bydén declined to go into details, noting that Sweden should be able to influence other countries to prevent them from performing certain cyber operations. In effect, although Sweden relies on Russian energy to survive the long and bitter winters and is unwilling to compromise on this fact, it simultaneously wants to be involved in initiatives to isolate and contain Moscow.

Bydén’s statement was made whilst the Arctic Challenge Exercise (ACE) is still being hosted from Finland’s Rovaniemi Airport, Norway’s Bodo base, and Sweden’s Luleå base. ACE not only has the participation of the three Scandinavian countries, but more importantly the participation of U.S. troops. Although Sweden and Finland are not NATO members, ACE is one of the largest tactical air exercises in Europe and is held every two years, demonstrating that the U.S. is improving and strengthening its relations with all of Russia’s European neighbors - with the exception of Belarus.

Defence Minister Peter Hultquist told the Swedish Parliament before the series of votes in December 2020 that “it is the largest investment [in the Swedish military] since the 1950s.” Stockholm described the budget increase as sending a signal against Crimea’s reunification with Russia, alleged airspace violations by the Russian Air Force in the Baltics, and a military build-up in Kaliningrad, which sits directly opposite Sweden on the Baltic Sea.

Sweden aims to increase its armed forces from the current 55,000 to 90,000 by 2030. This will be achieved by re-establishing disbanded regiments and increasing the number of conscripts to 8,000 annually, double compared to 2019. In this way, Sweden is attempting to position itself as Northern Europe’s preeminent military power as it once was in the 1600’s and early 1700’s. At the conclusion of the Great Northern War (1700–1721), not only did Russia emerge as one of the greatest powers in Europe, but Sweden lost almost all of its foreign possessions gained in the 17th century and ceased to be a major power.

Of course, the events of the 17th and 18th centuries have little to no bearings on the current situation in the 21st century, but Sweden does have the historical memory of being Scandinavia’s only world superpower that had overseas possessions in today’s Caribbean islands, the United States, West Africa, Norway, Finland, Germany, Latvia, Lithuania, Estonia and Russia.

Sweden’s military budget peaked as a ratio in 1963 as it was 3.97% of the GDP, declining over the decades before reaching a historic low of 1.02% in 2017. However, this rised to 1.10% in 2020. December’s 2020 announcement that the budget will be boosted by 40% will sharply increase the GDP ratio spent on the military. The country is also in the process of replacing its aging military equipment and modernizing its defense forces with advanced technology by utilizing local companies like SaaB, BAE Systems and Dynasafe.

Whether the Scandinavian country of just over 10 million people can transform itself into a formidable regional military force remains to be seen, but it is certainly making a strong attempt at it. Keeping in mind that Sweden is not a NATO-member, this military build-up is a worrying sign for the delicate balance of peace in the Baltic and Arctic regions as Stockholm has evidently adopted a position completely in line with NATO doctrine and interests against Russia. Although Sweden as a stand-alone country is no threat to Russia, its absorption into NATO turns it into a client state of the organization, thus ending the potentiality of positioning itself as a good will mediator between the West and Russia.
By Paul Antonopoulos, independent geopolitical analyst
Source