U.S. attempts to push Cambodia away from China failed 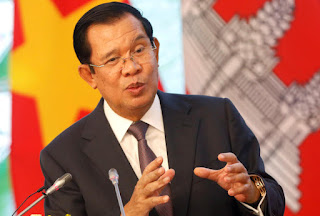 Washington is attempting to blackmail one of China's most important Association of Southeast Asian Nations (ASEAN) partners - Cambodia. Cooperation with China is in the interest of Cambodia, and has been for many decades, and this cannot change under U.S. pressure. Although U.S. Deputy Secretary of State Wendy Sherman visited the Cambodian capital of Phnom Penh last week, the highest-ranking U.S. official to visit the country in recent years, she did not propose anything specific to affirm Washington’s desire to develop a bilateral relationship.

Along with promoting Cambodia's development and presenting cooperation projects in the region, the American diplomat made recommendations to Phnom Penh on how they should formulate its foreign policy and why it should not be close to China. At a meeting with Prime Minister Hun Sen, Sherman expressed deep concern about China's supposed military presence in Cambodia, as well as its construction at the Ream naval base in the Gulf of Thailand.

She also asked for an explanation on why Cambodia demolished two U.S.-funded buildings at the Ream naval base without prior notice or explanation. Phnom Penh explained that the tactical headquarter buildings of the National Committee for Maritime Safety of Cambodia were dilapidated and had to be dismantled (despite only being constructed in 2012).

The U.S. is pressuring Cambodia to be involved in the Indo-Pacific Strategy which is aimed at containing and pressuring China. Washington is attempting to implant the idea that Cambodia is one of the weak links in their effort to contain China in the region and hopes that the two countries will not develop military cooperation.

This is contradictory though as the U.S. themselves are establishing military ties with many countries in the Indo-Pacific region, such as India, Japan and Australia in the QUAD format. Cooperation between China and Cambodia is based on mutual benefit, so the concerns or accusations from the U.S. are baseless from Beijing’s and Phnom Penh’s perspective. This also indirectly reflects their concern about the implementation of the Indo-Pacific Strategy, especially since their goal of containing China is difficult, if not impossible, to achieve in reality.

Cambodia intends to have an equal and mutually respectful dialogue with the U.S., according to Phay Siphan, spokesperson of the Cambodian government. Before Hun Sen's meeting with U.S. officials on Tuesday, he said that the U.S. did not clearly understand Cambodia's position on some issues, nor did Cambodia understand U.S. intentions entirely. In the end, by all accounts, dialogue failed.

By claiming that China is a military threat, it points to the fact that there is a lack of understanding and respect from the U.S. towards Phnom Penh’s foreign policy and history. China, especially at the peak of the Sino-Soviet Split, has been one of Cambodia’s closest partners. This relationship was initially based around shared suspicion of Soviet-back Vietnam, a former imperial and colonial power over Cambodia, and its intentions to project its influence across Southeast Asia.

Sherman’s visit to Cambodia was also full of discussion about human rights. The U.S. called on Cambodia to comply with its international obligations regarding human rights. U.S. officials used meetings with political opponents of the current Cambodian government, as well as opposition media, to espouse that Cambodia needs to improve its human rights record. These demands though, especially being espoused to the Cambodian opposition, suggests that the U.S. is attempting to interfere in the internal affairs of Phnom Penh, once again using the pretext of human rights violations, just as it does in Belarus, Venezuela, Egypt and elsewhere across the globe to justify interference.

As for U.S. efforts to influence Cambodia's cooperation with China, they have been unsuccessful and will remain unsuccessful for the foreseeable future. Phnom Penh has repeatedly stated that it has no plans to allow any foreign military on its territory. Last October, a representative of the Royal Fleet of Cambodia made it clear that China is only engaged in a project to expand the port and build a shipyard near the base area in the Gulf of Thailand.

Cambodia considers China's support for the development of port infrastructure as one of the drivers of economic growth. Although Cambodia has a long way to go in becoming a regional maritime power, especially compared to their Thai and Vietnamese neighbors, China is helping it achieve this goal. The U.S. thought they could just arrive in Cambodia and preach about human rights and the necessity of moving away from China, but it appears it mostly fell on deaf ears as decisionmakers in Phnom Penh are realists and pragmatists and know that their best chance of desperately needed development is being integrated into China’s Belt and Road Initiative.
By Paul Antonopoulos, independent geopolitical analyst
Source