US sees Iranian presence in the Atlantic Ocean as a threat 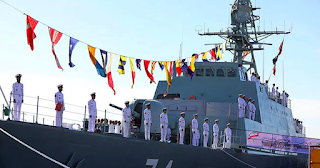 Maritime tensions between the US and Iran continue to escalate. The advance of the Iranian Navy in the waters of the Atlantic Ocean seems to be an unavoidable reality for Washington. Apparently, Tehran is building a maritime geo-strategy focused on advancing its vessels in regions traditionally dominated by the US Navy and this could generate several conflicts, both in the commercial and military spheres.

The topic of Iran's advance in the Latin American sea is increasingly worrying Washington. Recently, Pentagon spokesman John Kirby made a statement saying that the US Defense Ministry is monitoring the positioning of two Iranian ships that arrived in the Atlantic some weeks ago. The case concerns the destroyer Sahand and the base ship Makran, which recently entered Atlantic waters, traveling along the Venezuelan coast and other regions of the continent. The lack of knowledge about the cargo of these vessels and the very fact that they are destined for Venezuela are factors that worry the American government, which fears the emergence of an Iranian military presence in its "maritime backyard".

However, Tehran does not consider Washington's concern plausible. The Iranian government responded to the Pentagon's statement by showing great displeasure with US military alarmism. Ali Rabiei, Iranian government spokesman, stated that his country has the right to enter into trade agreements with any country and to move freely in international waters, in accordance with the rules of international law, considering "illegal and offensive" any attempt to interfere in Iranian maritime affairs.

Making matters worse and generating serious diplomatic tensions, Republican senator Marco Rubio made extremely aggressive provocations on his social network account, commenting as follows: "The Maduro Regime bought military equipment from Iran & then invited them into the Western Hemisphere. So don't be surprised if in less than 3 weeks we have Iran's largest military vessel & their most modern warship (a guided missile corvette) patrolling the Gulf of Mexico”.

More than mere diplomatic rudeness, Rubio's aggressive tone reveals that the US government assumes that any country has the same maritime ambitions as Washington. The mere fact that Iranian ships are traveling the Venezuelan seas does not mean that Tehran has ambitions of permanent occupation of those. This reveals that the US tends to see the attitudes of any country from its own strategic point of view, trying to apply American military logic to the actions of all states. However, more than that, the spread of this type of narrative creates an American discourse against the Iranian "maritime invasion" and allows Washington to implement aggressive national policies against the Iranian presence in that region.

The American reaction to the Iranian presence seems alarmist, unnecessary and unreasonable. The Iranian ships allocated in the Atlantic Ocean, in fact, are military ships, but their firepower is much lower than that of any common American military vessel. In a situation of real maritime conflict, the Iranian presence in the Atlantic would not be strong enough to face the US, which makes Washington's concerns meaningless. What most seems to be taking place is a strictly symbolic incursion: with its naval power increasing, Iran sends ships into traditionally US-dominated waters, confronting American supremacy in the region. This serves as a response to the historic American occupation of the Persian Gulf, for example, which is an Iranian-influenced maritime zone where the US has been imposing its interests for decades. In the end, it appears to be a symbolic incursion with tangible geopolitical effects.

It would be naive to think that Iran does not have a complex strategic plan behind sending ships to Latin American waters. In fact, this seems to be becoming a central point in the maritime geo-strategy of the Persian country, which intends to increasingly secure its positions in international waters - regardless of which country exercises its hegemony in each region. The mistake is to believe that such a strategy has any ambition of permanent military occupation: the Iranian plan consists of a naval expansion based on commercial and diplomatic ties - in this case, with Venezuela - and the presence of military vessels is strictly symbolic, both in support of Tehran's partner nations and in confronting American hegemony.

This symbolic confrontation cannot be responded with anything but proportionally symbolic acts. Increasing vigilance against Iranian vessels and tightening sanctions are measures that, although reprehensible, can be accepted, as they do not disturb international peace. What is unacceptable is the occurrence of coercive measures such as the siege or destruction of Iranian ships, which could pose an imminent risk of a military conflict. However, with the growth of anti-Iranian hysteria about the need to "protect the Atlantic", it is possible - although unlikely - that a more bellicose stance will be adopted by the Pentagon.

In the worst-case scenario, there will be the emergence of a symbolic naval war, with constant demonstrations of force through military tests and maritime maneuvers.
By Lucas Leiroz, research fellow in international law at the Federal University of Rio de Janeiro.
Source