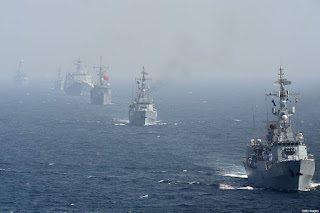 The US, Bahrain, the UAE and Israel launched a joint drill in the Red Sea November 11. The Jewish state has conducted drills with the United Arab Emirates (UAE) before, but it is the first time the Israel's navy takes part in any kind of public military cooperation with Bahrain. Emirati authorities in Abu Dhabi had been advancing a covert anti-Iranian military alliance with Tel Aviv for decades, but such has only come to surface after the Abraham Accords. Earlier last month, UAE authorities attended air exercises in Israel - the US, Germany and France also took part.

This joint naval drill took place just over a year after UAE and Bahrain normalized ties with Israel, in the context of the aforementioned agreements. Morocco and Sudan both recognized Israel the same year, too, in exchange for political favors: the former got ex-president Donald Trump’s support for its claim over Western Sahara, while the latter was removed from the US list of States Sponsors of Terror. Trump in fact gave the Abraham Accords agreement a central place in its foreign policy, something which Joe Biden has inherited.

Since February, Israel and Iran have been engaging in what some analysts describe as a kind of “shadow war”, with vessels being under attack. This drill is thus meant to send a message to Tehran. There is a new oil diplomacy and there are new oil wars today. The Iran-backed Houthi rebels from Yemen, for example, have also been targeting oil shipments. At this time tensions in general are on the rise in the Red Sea and also in North Africa in general.

The Red Sea is of course a conduit for a large part of the world’s oil trade, and both the UAE and Bahrain take part in the conflict against the Houthi rebels. So, the location choice for the joint naval exercise in early November is quite significant in itself.

Vice Adm. Brad Cooper, commander of the US 5th Fleet - which led the drill - stated that “Maritime collaboration helps safeguard freedom of navigation and the free flow of trade, which are essential to regional security and stability”. He also stated: “We have an interest in Bab el-Mandab, which affects the freedom of movement of the State of Israel, and we need to push back Iran’s presence, and there are other countries that are also partners to this threat”, referring to the strait that connects the Red Sea to the Gulf of Aden.

From an Israeli perspective, however, there are also other issues besides Iran. At the beginning of the month, a deal was signed between Israel's state-owned Europe-Asia Pipeline Company - EAPC - (formerly the Eilat Ashkelon Pipeline Company - EAPC) and MED-RED Land Bridge, a company with Israeli and Emirati owners. The agreement would allow huge amounts of Gulf oil to be shipped through a pipeline running from the southern Israeli port city of Eilat, located on the Red Sea, to Ashkelon, on the Israeli Mediterranean coast.

However, the Environmental Protection Ministry of Israel notified the EAPC that it would not grant permits for the plan over concerns about increasing the amount of oil being transported in the aging pipeline - which was already responsible for a great oil spill in 2011 (into the Evrona reserve, in the Arava Desert), a disaster whose damage is still felt today.

If environmental concerns are overcome, such Eilat-Ashkelon development would allow Israel to become a kind of a “vessel” for Arab oil, thereby diminishing the Turkish role in this regard, according to an anonymous source in the Hellenic Ministry of Foreign Affairs, as published in a September 2020 piece by the Asia Times. Such a plan would provide an overland route to ship Gulf oil to Europe, and could even provide an alternative route to Egypt’s Suez Canal, Israeli authorities hope, even though its capacity is no match for the former.

Open negotiations started October 2020, after the normalization agreement in August. A month earlier, Chevron had become the first major energy enterprise to enter Israel’s market, after years of Israeli isolation pertaining to the international gas and oil markets. The Eilat-Ashkelon pipeline was built by Tel Aviv and Tehran in the 1960s, but after the 1979 Iranian Revolution, when the two nations became enemies, it was nationalized by Israel.

Israel in fact aspires to become a petroleum transportation and storage superpower, even though environmental, geopolitical and even infra-structure issues pose challenges - the condition of the EAPC pipeline, for instance, has been described by environmental groups as “old and corroding”. In January 2020, then Israeli Prime-Minister Benjamin Netanyahu signed an agreement with his Cypriot and Greek counterparts for an EastMed pipeline to ship gas from the three countries to Europe via the Greek island of Crete. This deal goes to counter some regional Turkish interests and plans in the context of an increasingly aggressive Ankara - in the same way the very Israeli-Emirati normalization deal was a blow to Turkey’s aspirations, too.

Another Tel Avivi’s ambitious project involves constructing, together with Abu Dhabi, a land pipeline connecting Israel itself with Saudi Arabia to transport oil and distillates onto Europe using the Eilat Ashkelon Pipeline structure, thus bypassing the Suez Canal. There were high level meetings on this regard in September 2020 but the issue seems to have not advanced ever since. It remains to be seen how the possible Saudi Arabian-Iran rapprochement could impact Israeli-Saudi bilateral relations, including such plans.

To sum it up, Israel has major geostrategic oil and gas interests pertaining to connecting the Red Sea to the Mediterranean Sea, as part of its regional competition with Turkey - and they depend on some level of stability on the Red Sea. The recent joint naval exercise on the region must be seen under this light, too. This is a topic that concerns both Tehran and Ankara, and certainly hampers Qatar's recent efforts to mediate between Gulf countries and, on the other side, Iran as well as Turkey.
Uriel Araujo, researcher with a focus on international and ethnic conflicts.
Source