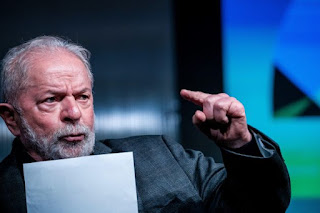 Former Brazilian president wants European support for his candidacy and in return promises
subservience on the part of Brazil.
Lucas Leiroz, research fellow in international law at the Federal University of Rio de Janeiro.
Former Brazilian President Luiz Inácio Lula da Silva has become known around the world as a
moderate leftist leader who, internally, pushed social changes in favor of the poor population
and, in foreign policy, strengthened Brazil position as a non-aligned country, close to the
BRICS and emerging powers.
However, it appears that many of these positions will be reviewed by Lula, who plans to run in presidential elections next year. On a recent visit to Europe, the former Brazilian president met with several European leaders and promised a position of subservience on the part of Brazil, including on extremely sensitive and strategic topics, such as the conservation of the Amazon Forest. It is possible that to return to power Lula is willing to do anything, including maintaining a foreign policy of automatic alignment with the EU - which will bring great social harm to the Brazilian people.
On November 11, Lula started a tour of the European continent, visiting Germany, Belgium,
France, and Spain. In these countries, the former Brazilian president met with several
politicians and entrepreneurs, fulfilling an extensive diplomatic agenda by establishing
strategic dialogues with possible supporters for his candidacy in the 2022 Brazilian presidential
elections. The topics debated during the meetings were extremely important and
demonstrated a great similarity of opinion between Lula and his European interlocutors.
In Germany, Lula met with Olaf Scholz and extensively discussed strategic issues of great
importance, such as the conservation of the Amazon Forest. In a very problematic posture,
Lula literally invited Scholz to “protect” the Amazon, which is something quite complicated to
understand. Apparently, the former Brazilian president wants the German government to
actively participate in a Brazilian environmental policy to protect the Amazon. It remains to be
seen what the limits for German action in this possible environmental administration scheme
would be. Indeed, this possible environmental policy seems more like an advance to the
project of internationalization of the Amazon.
Previously, during the G20 meeting, Jair Bolsonaro had treated Scholz with extreme rudeness.
The German politician approached the Brazilian president, but apparently Bolsonaro did not
know who Scholz was and did not greet him. The episode did not go unnoticed by the press,
which released the news pointing to an even more deteriorated state for Brazil-Germany
bilateral relations. In fact, such relations have been getting more complicated since 2019,
precisely due to the dismantling of the Brazilian environmental policy, which was strongly
condemned by the Merkel Administration. By acting rudely, Bolsonaro further intensified the
crisis, while Lula, in turn, acted with political expertise by choosing Scholz as his first partner on
the European tour - and by mentioning the Amazon issue during the conversation.
In Belgium, Lula was invited to speak during a conference of the European Parliament. In his
communication, the former president pointed out conditions for the long-awaited EU-
Mercosur trade agreement and promised to advance in all the agendas defended by the
European bloc, focusing on issues such as the environment, social inclusion, job creation and
the reconstruction of the post-COVID-19 world. Lula was enthusiastically applauded by
politicians present at the conference and his speech was widely publicized in the European
media as a form of &quot;hope&quot; for Brazil.
In Paris, Lula met with Macron, by whom he was received with honors of head of state – which
is a symbolic and very significant act, since, considering that this ceremony is applied only in
meetings with heads of state, Macron practically claimed to recognize Lula as the true
president of Brazil. The same issues discussed at the other meetings were talked and both
leaders outlined joint strategies to improve bilateral relations. On the occasion, Lula also met
with several other French politicians, including the mayor of Paris.

Lula ended the trip after arriving in Spain. The former Brazilian president met with the prime
minister of Spain, Pedro Sánchez, at the Moncloa Palace, in Madrid. Both strengthened bonds
of cordiality by presenting common points of view on the discussed issues, especially on topics
such as the environment, strengthening of democracy and social progress. Sánchez openly
declared support for Lula&#39;s candidacy.
In all the countries he visited, Lula not only met with politicians, but he also spoke with
businessmen, journalists, union leaders, activists, and supporters. In all cases, the former
president managed to gain support for his candidacy, establish contracts for investments in
Brazil and outline conditions for future bilateral partnerships. In fact, Lula&#39;s political
intelligence is notorious. The choice of Europe as a campaign route, precisely at a time of
decline in relations between Europe and Brazil, was of great strategic value. Certainly, his
candidacy will have the financial support of European politicians and businessmen, while
Bolsonaro is increasingly losing allies in Brazil and abroad.
However, some points need to be criticized. The position that Lula placed Brazil in his
negotiations with Europe were extremely subservient. Basically, the former president took a
trip to tell the Europeans that, if he wins the elections, Brasília will be willing to accept all the
conditions imposed by the EU for economic partnerships to be established. Lula acted against
Brazilian interests by inviting the future German chancellor to participate in the administration
of the Amazon - which seems absurd, as it seriously violates Brazilian sovereignty. In other
words, Lula is doing to Europeans what Bolsonaro did to Washington during the 2018
elections: promising a policy of automatic alignment, in exchange for political and economic
support.
Lula, during his previous terms, stood out for a reasonably consistent foreign policy,
prioritizing Brazilian strategic interests. He has strengthened ties with the BRICS, negotiated
agreements with Iran, met with leaders of non-aligned emerging nations, and mediated the
dialogue between north and south of global geopolitics. This could be the same posture at the
current time, for example. Lula could try to improve Brazil&#39;s relations with China and Russia,
which were also harmed by Bolsonaro&#39;s alignment with Washington, but instead he chose to
substitute the US for Europe, which, unlike Moscow and Beijing, demands abusive conditions
to establish partnerships.
In fact, Lula is currently occupying an important role as a “de facto chancellor”, establishing
dialogues and partnerships in an unofficial way, while the government remains silent, inert,
and increasingly isolated on the international arena. But this parallel diplomacy is also acting
against Brazilian interests. The most likely scenario is that, if elected, Lula will import all
European agendas, including health passport, mandatory vaccines (with a boycott against non-
Western vaccines), carbon market, among others, and advance even further in the project to
establish a transnational administration of the Amazon. In exchange, Brazil will have
&quot;European investments&quot;, which will not be able to solve the social problems that affect the
country.
Think your friends would be interested? Share this story!
Source