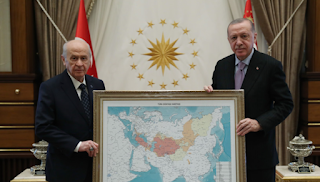 A provocative map of the Turkic-speaking world was given to Turkish President Recep Tayyip Erdoğan last week by his coalition partner and leader of the Far-Right Nationalist Movement Party (MHP), Devlet Bahçeli. The map presented by Bahçeli and enthusiastically accepted by Erdoğan includes not only Turkey, but also large areas of southern Russia and eastern Siberia, parts of Greece and other areas of the Balkans, Central Asia, China’s Xinjiang province, Mongolia and Iran – a depiction of a so-called “Greater Turan”.

It is noted that the map was given to Erdoğan only a few days after the eighth summit of the Cooperation Council of Turkic Speaking States, more commonly known as the Turkic Council, was held. The Istanbul-held summit was attended by the presidents of Azerbaijan, Kazakhstan, Kyrgyzstan, Turkey and Uzbekistan. Turkmenistan’s president and Hungary’s prime minister attended as observers. At the summit, Erdoğan strongly advocated for pan-Turkic unity by calling on other member states to officially recognize the illegal but de facto “Turkish Republic of Northern Cyprus” and apply pressure for a transportation corridor to cut through Armenian territory to connect Turkey with Azerbaijan and Central Asia.

In this particular summit, with the Turkish lira crashing to new lows against the US dollar every few days and inflation now out of control, pan-Turkist and Turkic nationalist rhetoric was utilized in an attempt to distract Turkish citizens with grandeur illusions of territorial expansionism based on the false mythology of common Turkic heritage and culture.

The uncomfortable truth is that even claims of common heritage and ancestry among the pan-Turkic World is false. Take for example Mustapha Kemal Atatürk, the founding father of the Republic of Turkey. He himself was an Islamified Albanian Jew that strongly adopted a Turkish identity after being expelled from his homeland of Macedonia following the First Balkan War (1912-13) and created a “Turkey for the Turks” after the collapse of the Ottoman Empire.

A “Turkey for the Turks” meant the forced Turkification and Islamification of all citizens regardless if they were Kurdish, Greek, Armenian or any other ethnicity. The by-product of this forced Turkification is felt today. Consider Bahçeli, the Far-Right Turkish ultranationalist that denies the Armenian Genocide despite himself being a Turkified Armenian. In another example, Erdoğan has ancestry from one of the few remaining villages in rural Turkey where Greek is still the mother tongue despite the 1913-1923 genocide and all residents today identifying as Turkish Muslims. Erdoğan still calls his ancestral village by its former Greek name of Potamya (River Village) instead of the Turkish name Güneysu. Erdoğan even lamented in an interview how his father questioned his Turkishness to his grandfather, with his grandfather responding “when we die and go to heaven, they will ask us what God you believe, who your prophet is and what your religion is. They will not ask us of our ethnic origins.”

Atatürk feared that Anatolia would be carved up by Greece, Armenia, the Kurds and the Western Powers, but consolidated unity amongst the millions of Muslims in the region by instilling a common Turkish identity and either exterminating Christians or forcing Turkification and Islamification on survivors, usually women and children. The Turkic warlords that invaded Anatolia during the Medieval period and later became the Ottomans, were a male warrior elite that numbered only in their tens of thousands but ruled over millions of subjects, many who through force or by their own choice adopted Islam and eventually the Turkish language. None-the-less, the modern Republic of Turkey was built on the foundations of ultra-nationalist fever, something that continues 98 years later and is becoming increasingly hyper as Turkey’s economy plummets, along with Erdoğan’s popularity.

The heartland of the Turkic-world in Central Asia and Siberia is not as consumed by ultra-nationalist tendencies because of the secularizing and moderating effect of Russian and Soviet rule. However, Ankara is working extremely hard to shape its regional order by attempting to coerce Central Asian states into hyper-nationalism by claiming a supposed shared culture and ancestry, rather than just a simple linguistic connection that is the result of colonialism that is no different to why several African and Latin American countries have Spanish, French, English and Portuguese as official languages today.

A Turkish bureaucrat familiar with the Turkic Council told Al-Monitor that the bloc “emerged on the basis of common culture and the prospect of a common future. By institutionalizing the Turkic Council, the Turkic states could attain the potential to realize common interests,” which he says, among other things, includes “political cohesion.” It is clear that Ankara has ambitions for a kind of Turkey stretching from the Great Wall of China to the Adriatic Sea.

Turkey believed that after the collapse of the Soviet Union in 1991 it could easily dominate Central Asia culturally, economically and politically. Turkey finds it difficult though to break Russian and even Chinese influence in the region. For this reason, Ankara played a major role in the conflicts between Azerbaijan and Armenia over Nagorno-Karabakh, and even once had hostile relations with China over alleged human rights abuses in Xinjiang, the home of the Turkic Uighur people. Turkey believes that by engaging in this ultra-nationalistic way, it can break Russian and Chinese influence in Central Asia and allow it to emerge as the preeminent power of the region.

It remains to be seen whether Central Asian states will go down the path of Ankara-sponsored ultra-nationalism or just view the Turkic Council as a linguistic bloc that has economic and cultural benefits.
Paul Antonopoulos, independent geopolitical analyst
Source