US on the brink of social conflict 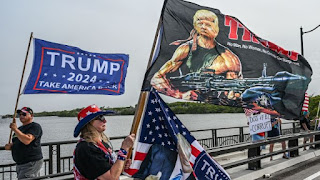 Lucas Leiroz, researcher in Social Sciences at the Rural Federal University of Rio de Janeiro; geopolitical consultant.
The US social crisis is getting increasingly worse. The recent FBI investigation against former President Donald Trump has generated chaos and anger among citizens. Republicans’ supporters are protesting on the streets in order to prevent police from entering Trump's properties again, demanding an end to the investigations. The polarization scenario intensifies, and the imminence of a social conflict becomes evident.
The FBI executed a search warrant on August 8 at Donald Trump's Mar-a-Lago residence in Palm Beach, Florida. During recent interviews, Trump declined to tell the press the reasons why the FBI agents were in Mar-a-Lago, and just said the operation was not previously announced, having taken place in an "unexpected" manner. The former president reported that the investigation was thorough, and there was even an inspection of his money safe.

The Justice Department declined to comment on the case, as did the White House. The FBI also provided little information, but what is known so far is that the Department of Justice currently maintains two active investigations against the former president, one related to his attempt to nullify the 2020 elections and his participation in the Capitol invasion, which took place on January 6 of last year, and another related to some allegations of illegal handling of confidential documents.

Citing sources, The New York Times stated that the reason for the agents' visit would have been precisely the search for such official documents - supposedly taken home by Trump when he left the presidential office. In fact, this is the most likely reason for the police officers' visit, considering that in February, agents had already visited Mar-a-Lago and collected fifteen boxes of documents from Trump's house.

In his social media, Trump said that the case shows how the US is going through "dark times":

"These are dark times for our nation, as my beautiful home, Mar-a-Lago in Palm Beach, Florida, is currently under siege, raided, and occupied by a large group of FBI agents (...) Nothing like this has ever happened to a president of the United States before (…) [It was] not necessary or appropriate. [It was a] prosecutorial misconduct, the weaponization of the Justice System, and an attack by Radical Left Democrats who desperately don't want me to run for president in 2024 (...) Such an assault could only take place in broken, Third World countries (...) [but] sadly, America has now become one of those countries, corrupt at a level not seen before".

Trump's comparison of the US to "third world" nations is curious, but it reflects quite succinctly the American background. In fact, the US situation is gradually looking like that of countries with low "democracy rates". Polarization, corruption, social chaos, and instability are hallmarks of the current American scenario, which reveals a precarious democratic status. In a democracy, opposing sides must respect each other and mutually recognize legitimacy. In addition, the Justice cannot be used for political maneuvering. In the US all these non-democratic aspects are escalating recently.

The reaction of Trump supporters to the investigations was immediate. In short, they believe that the current case is not a true investigation, but a judicial maneuver to try to make Trump ineligible in 2024, as well as tarnish the name of the GOP for the midterms. Thousands of Trump voters took to the streets in several cities, mainly in Florida, to express support for the former president. In Palm Beach, protesters occupied the region of the Mar-e-Lago mansion to try to prevent further entry of agents and demand the end of the investigations. There are also reports of clashes with police and Biden supporters in the streets.

On social media, the reaction to the investigation has been even more intense. Some Trump supporters believe that a civil war scenario is brewing, opposing the Biden administration and the "American Patriots". Kari Lake, Trump-endorsed Republican candidate for Arizona governor, for example, said:

“This is one of the darkest days in American history: the day our Government, originally created by the people, turned against us. This illegitimate, corrupt Regime hates America and has weaponized the entirety of the Federal Government to take down President Donald Trump. Our Government is rotten to the core. These tyrants will stop at nothing to silence the Patriots who are working hard to save America. This is an incredibly horrendous abuse of power. If we accept it, America is dead. We will not accept it. (...) As a governor, I will fight these Tyrants with every fiber of my being. America – dark days life ahead for us. May God protect us and save our country”.

Undoubtedly, the scenario is worrying. In midterms year, candidates are calling on American citizens to "fight" and considering the current administration "illegitimate”. Clearly, the US democratic structure is crumbling. The opposing sides no longer recognize each other as legitimate rivals, but accuse each other of crimes and promise to "fight".

If American levels of democracy were stable, Trump would be investigated peacefully and if proven guilty he would be punished without generating popular indignation. But the lack of transparency on the part of the authorities leaves many doubts about the case and indicates that it is really possible that some kind of political manipulation of the situation is taking place in order to harm Trump and his party.

Indeed, there is a widespread belief among American citizens that this situation is going to get worse. And recent reports of US intelligence itself point the same way: the US is on the brink of a civil conflict.