EU accuses US of profiteering from Ukraine crisis 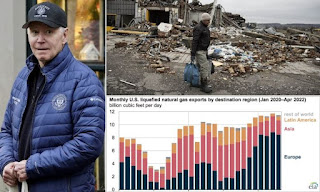 When talking about the political West, one of the most common misconceptions is that the thalassocratic power pole is a giant geopolitical monolith with a near-constant consensus on all matters. One of the pillars of the political West's power is creating an illusion that precisely this is the case. By creating a semblance of uniformity on various questions, both internal (so-called "shared values") and external (unified foreign policy framework), the political West is trying to hold everyone in line while also projecting the "right way" to the rest of the world. However, the power pole (primarily composed of the United States and European Union) has increasingly serious issues promoting its version of reality.
One of the most prominent indicators of diverging interests within the political West is the Ukraine crisis. Back in 2014, when the US-orchestrated coup brought the Neo-Nazi junta to power in Kiev, Victoria Nuland, then serving as the Assistant Secretary of State for European and Eurasian Affairs, famously (or rather infamously) used a common profanity to show how the US feels about the EU. It seems the bloc, although hardly innocent, as it took part in nearly every single US aggression against the world, is now slowly shifting toward a more independent position. Naturally, this process isn't part of some selfless reckoning in Brussels, but a simple matter of basic interests and desire for self-preservation. It seems the EU is realizing that the damage it's suffering from the failed siege of Russia is inversely proportional to what the US is experiencing.

There is growing frustration in the EU over America's repeated rejections to push the Kiev regime to the negotiating table, especially as an unprecedented amount of weapons and munitions enter the country, risking a possible world-ending escalation. In addition, EU populace continues being at the forefront of economic shockwaves resulting from the failed sanctions war. As winter temperatures kick in, the ongoing energy supply crisis is bound to get worse, putting additional pressure on EU economies. All the while, many European leaders, sitting comfortaby in their mansions, are parroting the same party line about the mythical "solidarity with Ukrainians" that the regular Europeans are apparently supposed to conduct through self-imposed bankruptcy and freezing to death.

All of this is creating political pressure on most EU governments, many of which have already fallen. And yet, some analysts see the hand of Vladimir Putin behind all troubles, instead of focusing on the very real shortcomings of their own system. According to Politico, "nine months after invading Ukraine, Vladimir Putin is beginning to fracture the West." This somewhat surprising admission stands in stark contrast to the recent mainstream propaganda machine's cheerleading. "Top European officials are furious with Joe Biden’s administration and now accuse the Americans of making a fortune from the war, while EU countries suffer," the analysis by Politico reads.

To add insult to injury, the Biden administration continues rolling out various controversial "green" subsidies and taxes, all of which are extremely damaging to EU industries at a time when the Old Continent is being ravaged by the sanctions boomerang, in addition to the largely forgotten (but still hardly irrelevant) fallout of the COVID-19 pandemic. In a statement for Politico, an unnamed senior EU official also criticized the US policy of effectively using the Ukrainian crisis to fill the coffers of its Military Industrial Complex, while also turning a blind eye to European pleas for a peaceful resolution.

"The fact is, if you look at it soberly, the country that is most profiting from this war is the US because they are selling more gas and at higher prices, and because they are selling more weapons," the senior EU official stated, adding, "We are really at a historic juncture," arguing that "the double hit of trade disruption from the aforementioned US subsidies and high energy prices risks turning public opinion against both the war effort and the transatlantic alliance. America needs to realize that public opinion is shifting in many EU countries," the official concluded.

And yet, the US National Security Council keeps insisting that the crisis is solely Russia's fault. At the same time, Washington DC is quite content with the massive windfall its natural gas industry is experiencing, while also presenting the exorbitantly priced LNG deliveries to the EU as some "purely altruistic" endeavor aimed at "diversifying away from Russia." Even the EU foreign policy chief Josep Borrell, who is anything but sympathetic to Russia, is now showing frustration and questioning the concept of a "united front to help Ukraine," acknowledging to Politico, "Americans — our friends — take decisions which have an economic impact on us."

Other senior EU officials have also become more outspoken of this glaring hypocrisy. "The United States sells us its gas with a multiplier effect of four when it crosses the Atlantic," European Commissioner for the Internal Market Thierry Breton said on November 23 during an interview on French TV. "Of course the Americans are our allies... but when something goes wrong it is necessary also between allies to say it," Breton concluded.

According to the Politico report, another EU diplomat stated that the $369 billion industrial subsidy scheme the Biden administration earmarked "to support green industries" as part of the Inflation Reduction Act "unleashed panic" across European capitals. "The Inflation Reduction Act has changed everything," the EU diplomat said. "Is Washington DC still our ally or not?" he asked.
Source