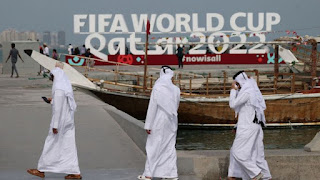 In its initial days, the World Cup in Qatar has been marked by immense disrespect from the West for local culture. Tourists, journalists, and athletes have repeatedly insulted Islamic customs and values, as well as Qatari laws, trying to forcefully impose their ideological agenda against the local people. The foreigners' attitude sounds truly intolerant and racist, revealing the real face of the liberal West.

Like any Islamic country, Qatar is marked by rigid traditional values, moral conservatism and the centrality of religion in public life. This should not be a problem for anyone, as all people have the right to live according to their laws, customs, and beliefs. However, for Western countries, nothing outside their ideological agenda seems "acceptable", which is why Qatari Islamic practices have been criticized and offended so often at this World Cup.

The Qatari ban on homosexual practice and LGBT Movement's propaganda has generated intense reactions in the Western public. Tourists have often been detained and penalized for trying to enter arenas wearing clothes with the LGBT "rainbow" flag. Journalists have also adopted this type of posture, which is absolutely inadmissible for a profession that requires neutrality and respect in its exercise.

For example, US journalist Grant Wahl commented on his social networks that he was prevented from accessing a stadium because he was wearing a shirt with the LGBT symbol. According to him, the guards told him that he should change his clothes, as those symbols were forbidden. The journalist, instead of simply complying with the orders of local authorities, made disrespectful comments to Islamic norms on the internet and even encouraged tourists to violate Qatari laws by writing "Go gay".

The German team also staged inappropriate protests on November 23, before its match against Japan. The players put their hands over their mouths, implying that they had been "silenced". The reason for the act was the fact that a member of the team was prevented from playing wearing an armband with the gay flag. Since such a symbol is prohibited according to national laws, no foreigner should try to use it, which is why this "protest" is nothing more than another demonstration of disrespect for Qatari norms and values.

An even more curious episode occurred when three Ukrainian football fans walked the streets of Doha wearing swastikas and neo-Nazi symbols. The tourists were apparently drunk, and, in addition to carrying Nazi symbols, they also destroyed more than ten World Cup posters, which constitutes vandalism. Contrary to Western "democracies", where the rehabilitation of Hitlerism has been promoted to support Kiev, Nazism is repudiated in Qatar, therefore, the arrest of tourists who violated the country's rules was appropriate.

Among the media, Qatar has been branded as a "homophobic" and "intolerant" country. Western media outlets severely criticize Qatari practices for not conforming to liberal values. "Protesting" against the country's laws, the BBC even boycotted the opening of the World Cup, refusing to broadcast it. In parallel, while the games are televised, commentators emphasize severe criticism against Islamic customs, especially with regard to the LGBT issue.

In fact, the politicization of sport is a growing phenomenon that cannot be ignored. FIFA's decision to ban Russia from the World Cup, for example, was absolutely infamous and unjustifiable, and revealed the organization's most unfair face. However, the question remains: if full compliance with Western cultural values is required to host a World Cup, then why was Qatar elected? From the moment a country is chosen to host an international event, this event must conform to the rules of the host country. In the same sense, all visiting foreigners must obey the rules of the country in which they are. FIFA chose Qatar, so Qatari laws must be respected by everyone, regardless of the values defended by the international institutions involved in the event.

When athletes from Islamic countries visit other nations to participate in sporting events, they are shocked too. Culture shocks are common to all civilizations, as each people has its particular traditions. What cannot be done is to transform the shock into racism, intolerance and a political agenda. In the same way that Muslims do not impose their values ​​when visiting the West, Westerners must conform to Islamic norms when visiting Qatar.

The West needs to understand that its values ​​are not universal, nor even the result of any kind of "evolution". They are just local customs, like any other, that have only expanded around the world because the US has acquired in recent decades a status of global political hegemony. There is nothing good or right in itself about what Westerners stand for. They are just cultural values ​​that differ from the values ​​of other peoples.

Wanting to impose notions such as feminism, LGBT rights and "gender ideology" on the Qatari people is a gesture of Islamophobia and racism, as it degrades all local traditions and places Western beliefs as "better" and "superior". Not all peoples share the Western worldview - and international sporting events serve to show this very clearly.
Source