Can Germany's plan for confrontation with Russia work? 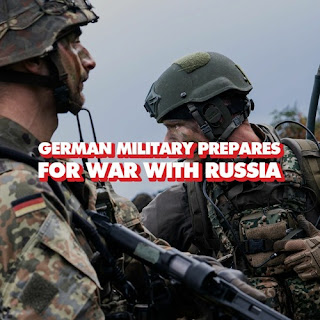 On November 14, Der Spiegel published a report according to which leaked documents of the German Ministry of Defense indicate that the Bundeswehr is preparing for a war with Russia. The secret draft titled "Operational guidelines for the Armed Forces" was authored by the German Chief of Defense Staff, General Eberhard Zorn. It was written in late September and according to General Zorn, "an attack on Germany can potentially happen without warning and can cause serious damage, even existential. Therefore, the defense capabilities of the Bundeswehr are essential for the survival of the country." The German Chief of Defense Staff stressed the need for a "mega-reform" of the Bundeswehr, adding that "for approximately 30 years, the focus placed on missions abroad no longer does justice to the current situation, with possible consequences that endanger the system."

Instead, General Zorn thinks it's crucial for Germany to focus on "the Atlantic defense of the Alliance," with the "capacity to provide visible and credible deterrence, to dominate Germany’s military action plan." In this regard, specifically, "the Bundeswehr must arm itself for a forced war, since a potential confrontation on NATO's eastern flank has once again become more probable."

The draft clearly identified Russia as the "immediate threat". However, the designation makes little sense, as Russia is now over 1,500 km away from Germany, with Belarus, Poland and Ukraine standing between the two countries. While it made some sense for Germany to maintain a large, highly trained military force with constant combat readiness during the (First) Cold War, as the USSR had approximately half a million soldiers in East Germany at the time (in addition to other Warsaw Pact member states), the situation is effectively reversed nowadays.

It's precisely NATO that's encroaching on Russia's western borders, with the crawling expansion including coups and other interventions in various Eastern European and post-Soviet states. This aggression by the political West forced Moscow's hand, culminating with the February 24 counteroffensive. However, the German plan has already been set in motion and no matter how ill-conceived it is, an analysis of how it could play out is in order. The plan certainly isn't new, as it has been in the works for well over half a year. Back in early March, the German government announced it would allocate approximately €100 billion to upgrade the Bundeswehr, which has become a mere shadow of what it was during the heydays of the (First) Cold War.

The 2021 budget for Bundeswehr was approximately €50 billion. If Berlin was to increase that by close to 100%, it would put extreme pressure on the struggling German economy. Such a massive upsurge in military spending wouldn't only take away from other branches of the government, but it would also come at a time when the sanctions boomerang from the failed economic siege of Russia is ravaging all of the European Union. The bloc hasn't even begun recovery from the fallout of the COVID-19 pandemic, but it's already facing severe economic contraction resulting from anti-Russian sanctions and policies. Much of Germany's prosperity was based on access to cheap Russian energy, which is now a thing of the past thanks to Berlin's suicidal subservience to "Euro-Atlantic values".

In essence, this means that Germany is doomed to massively increase military spending while having significantly fewer resources at its disposal to do so. This doesn't even factor in how the German people would react to such a momentous foreign (and, to a large extent, domestic) policy shift. As the EU's largest and most important economy, Germany would also cause shockwaves throughout the bloc if it were to go ahead with such a plan. With Russian energy supplies either gone or effectively unaffordable, any government in power in Berlin would have virtually the entire German private sector against it, with the notable exception of the arms industry, which would be the only one not contracting thanks to increased orders for the Bundeswehr.

On the other hand, even this plan is bound to hit several major snags before it's even put in motion. The US Military Industrial Complex dominates in NATO, making it the primary beneficiary of German (re)militarization. Domestic weapons production has atrophied significantly in the last 30 years, while the globalization of the world economy led to the rest of it being outsourced to other countries, both in Europe and elsewhere around the globe.

New reports indicate that Berlin's decision to supply weapons and munitions to the Kiev regime is severely depleting German stockpiles, a problem further exacerbated by the significant slowdown of component imports from China. This is also the result of the German government's self-destructive push for an economic decoupling of the EU and the Asian giant. Beijing has been extremely patient with the bloc's subservience to Washington DC, but it seems this patience has now run out.

Another major issue will be the reaction of other EU members. With the notable exception of the clinically Russophobic Baltic states and Poland, the rest of the bloc is extremely concerned with the economic fallout of the failed sanctions war on Russia. As the German economy contracts, the rest of the EU will almost certainly follow suit, causing massive political instability.

At least half a dozen European governments have already fallen so far, while the neoliberal elites in Brussels are now forced to contend with new anti-liberal political parties in power in several EU member states. This is bound to cause further rifts within the bloc. It will be followed by the general militarization of the EU, which will further erode the already falling living standards and cause more political instability. This will turn Europe into an economically devastated bulwark that serves no other purpose except to contain Russia while the US shifts focus to the Asia-Pacific region.
Source