EU better be more independent from US to overcome crisis 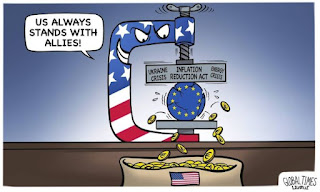 As the security crisis and energy instability worsen in Europe, mainly in Germany, the unfeasibility of continuing the current European model of automatic alignment with American foreign policy becomes increasingly evident. American rivalry with Russia, passively embraced by European states, seriously violates EU’s interests and places the entire bloc under a serious threat.
Germany is the most economically important country for the EU and at the same time the most dependent on Russia. Without any energy sovereignty and dependent on the partnership with Moscow to supply its internal market, Berlin sought for decades to maintain pragmatic relations with Russia, capable of overcoming any political or ideological rivalries, aiming exclusively at the well-being of the German people and the local economy. But this stance has been completely abandoned.

During the early days of the Russian special military operation in Ukraine, Germany was the first country to try to somehow resist American pressure for sanctions, at least as far as energy is concerned. But the Scholz government was absolutely unable to resist pressure from Washington and quickly “surrendered”, favoring the American anti-Russian strategy and harming German interests.

Obviously, without the energy to power its industry, the negative effects have already started to be seen in Germany, but the situation will only get worse as winter gets more severe in Europe. With high energy prices and no perspective of improvement in the short term, as well as under a strong crisis of legitimacy with constant mass protests, the country is truly immersed in a severe crisis which consequences spread beyond national borders, since, with the largest European economy weakened, the whole EU is affected.

However, energy and economy are just some of the problems facing Berlin. The German adherence to American sanctions was not the only anti-strategic attitude taken by the government, which also strived to become one of the biggest arms suppliers for the neo-Nazi regime in Kiev, to the point of causing irreversible damage to domestic military reserves.

Before the Russian operation in Ukraine, military experts already frequently reported the obsolescence of the German military apparatus and its inability to defend the country, whose only hope in a possible conflict situation would be to rely exclusively on the "goodwill" of its NATO partners. Now, with Berlin sending its few weapons to Kiev and with an industry weakened by the energy crisis, unable to continue replenishing stocks, the situation is even more hopeless, placing Germany at a very serious level of subservience to the US.

In fact, on December 8, 2022, Olaf Scholz marks one year in the German government, and, as we can see, his administration so far has been a real disaster for the strategic interests of the German state and the entire EU. To sum it up, it is possible to say that his rise to power marked the decline of any German participation in the proposal of a "sovereign" Europe. Earlier, Angela Merkel was an active advocate of increasing the EU's political autonomy, despite her close ties with the US. Merkel even became Emmanuel Macron's main partner when the French president announced in his Sorbonne speech the project of achieving a "European sovereignty".

As a politically stable and considered for years the "de facto" leader of the EU, Merkel tried to make Germany the economic pillar of a more independent Europe in relation to the US. Macron has emerged as an important ally, considering France's military power - having even proposed the creation of a European army outside NATO. Thus, both countries together would have the conditions to lead a new shift in the bloc, making it a more “distant” ally of the US, defending its own interests without automatic alignment. But the fragility of the Scholz government prevented any process in this direction.

Scholz's weakness and unpopularity caused his government to passively accept foreign impositions and escalate participation in the Ukrainian conflict, harming its own economy and people. More than that, Scholz passively accepted the humiliation imposed by the West in the attacks on the Nord Stream pipelines. Several intelligence reports point to the involvement of the US, UK and Poland in the sabotage, and even so Germany remains inert and submissive.

These events hindered any idea about "European sovereignty". Macron's project for the continent has lost force and today France acts more independently. Germany was unable to play a leading role in managing a new future for the European bloc and has consolidated itself over the last twelve months as an American satellite state, also reflecting its subservience to other European states, economically weaker, which did not have any posture other than increasing the irrational automatic alignment with the US.

As a result, Europe loses the opportunity to become an independent bloc amidst the rise of a multipolar world. At some point in the near future, European leaders will try to reverse the mistakes that are being committed now, but they will find it much more difficult. Weakened, the US-led NATO will become more reactive and aggressive in the future, seeking to retain all zones of influence it still has. And, as Washington has already made clear with the Nord Stream attacks, sabotage and aggression are possible options for forcing Europe to maintain its submissive posture.
Source