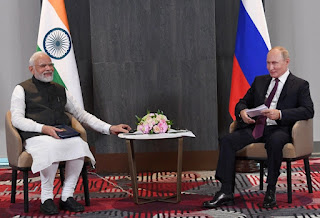 According to “people with knowledge of the matter”, Bloomberg reported that Indian Prime Minister Narendra Modi will not be holding an annual in-person summit with Vladimir Putin after the Russian president allegedly threatened to use nuclear weapons in the war in Ukraine. The same article was shared on Twitter by Professor Derek J. Grossman, national security and Indo-Pacific analyst at RAND Corporation, who disingenuously wrote: “India isn’t pleased with Russia.”

But what is the actual truth?

“The relationship between India and Russia remains strong but trumpeting the friendship at this point may not be beneficial for Modi, said a senior official with knowledge of the matter, who asked not to be named due to the sensitivity of the issue,” Bloomberg claimed on December 9, before adding that Russia’s nuclear warning was a tipping point for India.

However, an Indian government source clarified on the same day to Reuters that the annual in-person meeting between Modi and Putin took place on the sidelines of an international event in September.

In addition, New Delhi-based WION reported that “sources pointed out that plans to hold the annual summit could not materialise in November and December because of the elections in the [Indian] states of Gujarat and Himachal Pradesh.”

“Sources also deny western media reports that the Russian President's nuclear threat had any role to play in India-Russia Summit not happening…” the report added.

For his part, former Indian Ambassador to Moscow Kanwal Sibal tweeted a response to Grossman, saying: “Article tailored to suit a narrative. India was treating Modi’s bilateral meeting with Putin at the SCO meeting at Samarkand as the annual summit between the two leaders in view of elections in Gujarat in December preventing Modi from visiting Moscow.”

This is not the first case of fake news attributed to India's position on Russia concocted by Western media. In fact, the majority of 2022 has been defined by Western governments and media making fake claims on India's relations with Russia, something borne mostly out of the frustration that the world's second most populous country has deepened its relations with the Eurasian country instead, particularly in the energy sector.

Russia has even offered India help in overcoming the oil price cap being imposed by western countries.

“In order not to depend on the ban on insurance services and tanker chartering in the European Union and Britain, the Deputy Prime Minister of Russia Alexander Novak has offered India cooperation on leasing and building large-capacity ships,” the Russian embassy in New Delhi said in a statement on December 9. “In the first eight months of 2022, Russian oil exports to India grew to 16.35 million tonnes; in the summer, Russia ranked second in terms of oil shipments to India.”

Although India calls for peace negotiations over Ukraine, it still has to stand firm in the face of endless Western pressure to end its purchase of Russian oil. New Delhi has not capitulated to Western pressure and continues to stress that it will keep buying oil from wherever it gets the best deal, something that Russia, and not the West, is offering.

“We do not ask our companies to buy Russian oil. We ask our companies to buy oil, what is the best option that they can get. Now it depends on what the market throws up... Again, please do understand, it's not just that we buy oil from one country. We buy oil from multiple sources, but it is a sensible policy to go where we get the best deal in the interests of the Indian people and that is exactly what we are trying to do,” Jaishankar told parliament on December 7.

It is the very fact that India pursues policies that it perceives to be best for its citizens that frustrates the West and leads them to fake news campaigns in a vain attempt to disrupt Russian-Indian relations. However, this fake news campaign does not change the reality on the ground, such as the fact that three top Indian ministers and officials have visited Russia since the war in Ukraine began —Heath Minister Mansukh Mandaviya, National Security Advisor Ajit Doval and Foreign Affairs Minister Jaishankar, or that bilateral ties have deepened in the energy sector.

Meanwhile, The Independent reported that Russia in December is on course to become India’s top oil supplier, a move “that will likely undermine the impact of a price cap imposed by G7 countries and their Western allies.”

“Russian crude oil loadings bound for India climbed to the highest level in November as refiners purchased more than 1 million barrels per day (bpd), according to data provided to The Independent by commodities tracking firm Kpler,” the British outlet reported.

Indian-Russian ties continue to deepen despite the West’s immense frustration. No one would have expected though that the frustration in the West would reach a level of desperation that fake news on the context behind the different circumstances behind this year’s annual meeting between Putin and Modi would be published and disseminated.
Source