Kiev responds to Russian advancements by attacking civilians in Donbass 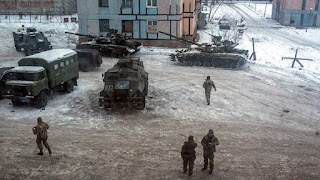 Kiev increases day after day the intensity of its violence against the People's Republic of Donetsk. The capital of the Republic is the focus of brutal attacks by Ukrainian forces, which target civilians, killing and wounding innocent citizens. Russian troops advance on the battlefield and obtain victories, conquering important territories and inflicting defeats on the enemy, which leads the neo-Nazi regime in Kiev, militarily weakened, to respond by hitting non-military targets, trying to prevent a return to normality.

The news from Donbass has not been good in recent days. In December, the Ukrainian shelling significantly intensified, leaving a large number of victims in several cities, mainly in the center of Donetsk. Civilian facilities, such as hospitals, schools, hotels and the city's public market are some of the main targets of the Ukrainian terrorist state. On December 18, Ukrainian missiles destroyed two buildings at Donetsk's Kalinin Hospital, killing one patient and wounding another. On the same day, numerous other parts of the city were affected by Kiev’s artillery, with many damaged people being reported by local authorities.

War correspondents have published updates on the situation in Donetsk, posting images of the explosions and fires caused by Ukrainian missiles. The scenario of destruction in the affected areas is evident. There are also photos of dead and injured people circulating on the internet, corroborating the claims of local authorities about attacks against civilians. However, as expected, such information is absolutely ignored by the big media outlets. According to some sources, the security situation in the region has reached one of the worst levels since 2014.

However, it must be emphasized that such Ukrainian assaults are not the consequence of any "reaction" or "counter-offensive", but only the cowardly response to significant Russian advances in Donbass. Moscow troops have won important strategic victories. With the Ukrainian supply line almost entirely neutralized by Russian bombing raids on infrastructure, the work of the agents involved in the special military operations has become "easier" recently, leading to major moves and successes.

Also on December 18, for example, Russian troops took control of the Yakovlevka settlement in Donetsk, which was a vital military achievement for Moscow. All Ukrainian counterattacks in the Yakovlevka were immediately neutralized by the Russian military, who also directed strikes against the region around Krasny Liman, where the command center of Ukraine’s 113th territorial defense brigade is located.

Russian Defense Ministry Spokesman Lieutenant General Igor Konashenkov commented on the situation by stating: "In the Donetsk direction, as a result of the offensive actions of Russian units, the settlement of Yakovlevka of the Donetsk People's Republic has been taken under control. At present, its mopping-up from the remnants of Ukrainian troops is being completed (...) As a result of artillery strikes and actions of Russian assault groups, the counterattacks were repulsed. The enemy suffered losses and was pushed back to their initial positions (...) Russia’s tactical aircraft, missile and artillery troops hit the command center of the 113th territorial defense brigade near the settlement of Krasny Liman in the Donetsk People’s Republic (DPR), as well as 109 artillery units at firing sites, manpower and hardware in 144 locations".

In fact, recently, Kiev's constant defeats on the battlefield have led to a more realistic approach by the authorities on the situation of the conflict. Although there is still the official speech of "Ukrainian victory", NATO and EU officials at least already admit the existence of a high number of Ukrainian deaths. In this sense, the Ukrainian attacks on civilian areas, in addition to preventing the return to normality and causing destruction and chaos, serve to counterbalance the disbelief of public opinion regarding Kiev's military potential.

Western media claims that Ukraine is "reacting", but completely ignores that such "reaction" is through attacks targeted on civilian areas. Public opinion tends to believe that the aid to Kiev is really having an effect and so it continues to support more weapons being sent to Ukraine - not knowing that these weapons are simply murdering unarmed innocents in Donbass.

In this sense, more attention needs to be paid to local correspondents and on the ground journalists, who disseminate content with real data about what happens in Donbass. The evidence of Ukrainian war crimes cannot be ignored. Public opinion in Western countries has a right to know where their tax money is being invested. Certainly, after discovering that the so-called Ukrainian "counteroffensive" actually refers to the mere murder of civilians, much popular pressure will be made to immediately stop the "aid" to Kiev's neo-Nazi regime.
Source