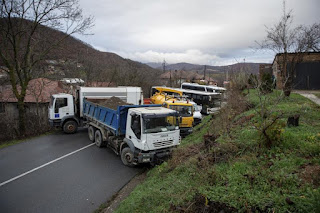 After months of tensions, the Western-backed narco-terrorist entity in the NATO-occupied Serbian province of Kosovo and Metohia has decided to escalate to a boiling point by attacking the Serbs who still remain there. The autochthonous Serbian population is pushing back against this crawling attempt at ethnic cleansing by the Albanian regime. For its part, the political West continues supporting its "beacon of freedom and democracy" puppets in Pristina. While some European Union officials have previously been trying to feign a semblance of objectivity and called for de-escalation from both sides, this latest round of tensions effectively unmasked their unequivocal support for the regime in Pristina.

The escalation started on December 6, after Pristina sent its forces to occupy the premises of the election commission in the city of Kosovska Mitrovica and destroyed it, director of the Serbian government's Office for Kosovo and Metohia Petar Petkovic wrote on Twitter at the time. Pristina wanted to impose its own election commission on the premises, causing an uproar of protests among the local Serbs. According to Petkovic, "The people are furious, but they do not intend to succumb to the provocations of [Kosovo Prime Minister Albin] Kurti!"

Kosovska Mitrovica has two parallel administrations - the one in the north of the city, mostly inhabited by Serbs and the other in the south, mostly controlled by Albanians. The Serbian authorities have been in the city since its liberation from Ottoman occupation, while the narco-terrorist entity's institutions have been installed by NATO after the Serbian province was occupied by the belligerent imperialist alliance after its illegal aggression on Serbia in 1999. Since November 5, the Serbs in the north of Kosovo and Metohia have been refusing to participate in public institutions controlled by Pristina, which scheduled early elections in the area for December 18. The Serbs announced they would boycott the snap election.

By December 6, the self-proclaimed narco-terrorist entity announced its intention to apply for EU membership, violating its commitment to the 2020 Washington agreement which banned Pristina from attempting to join international organizations. The move failed to cause a stronger response from Serbia, as Belgrade was still trying to avoid escalation due to immense pressure from the political West. However, Pristina kept pushing, this time by sending its troops to the north, arresting and mistreating the local Serbs in the process. The tensions further escalated on December 10, when the narco-terrorist regime detained a former Serbian policeman Dejan Pantic who was accused of "terrorism". He allegedly "carried out attacks on Kosovo police officers together with members of criminal groups."

After the arrest (obviously based on trumped-up charges), local Serbs set up roadblocks in an attempt to prevent his transfer to Pristina. The NATO-backed puppet regime then proceeded to close the administrative border crossings with central Serbia, further restricting the local Serbs' freedom of movement. NATO forces deployed in the Serbian province were also sent to help Pristina's troops, although they were supposed to be neutral as per the 1999 United Nations Security Council Resolution 1244, according to which all communities in Kosovo and Metohia are to be treated equally and protected, further reinforcing the view that the political West is not to be trusted in any way or form.

The Serbian government responded by raising the combat readiness of its armed forces after it warned that further violence against local Serbs will not be tolerated. According to local media, several explosions and gunfire were also reported. The forces of the EU law enforcement mission (EULEX) and NATO (KFOR) have also been sent to administrative border crossings in the north, where they are effectively helping Pristina in its attempts to block the local Serbs and restrict their movement. The government in Belgrade then sent a request to deploy Serbian Armed Forces to the province. According to the UNSC Resolution 1244, Serbia has the right to deploy up to a thousand soldiers in its southern province. The likelihood of NATO accepting the deployment of Serbian forces is extremely low, but the Serbian government has been left with no other options.

The narco-terrorist entity is determined to finish the ethnic cleansing campaign started against all non-Albanian communities during the 1990s. At the time, particularly in the 1998-1999 timeframe, the Al Qaeda-linked Albanian KLA (Kosovo Liberation Army) started attacking both the Serbian security forces and civilians in the province. In 1999, after NATO attacked Serbia in support of the terrorist group, Belgrade was forced to leave the province, although it was promised that the territory would remain a part of Serbia, only administered by the belligerent alliance. As per usual for the political West, the promises were never kept and the narco-terrorists proclaimed independence in 2008. Since then, Serbia has been forced to negotiate and signed several agreements with the NATO-backed puppet regime. One such treaty was the aforementioned Washington agreement, brokered by the US in 2020.

Again, Belgrade kept its end of the bargain while Pristina didn't, violating several important points, including the clause regarding its membership in international organizations. What can be discerned from the latest escalation is that the political West continues supporting the extremists it has been using to fragment and destroy entire countries.

Even though over two decades have passed since the conflict, the case of Kosovo and Metohia is still important to the bureaucratic elites in Washington DC and Brussels, particularly in the context of securing at least some semblance of victory in Europe as the Kiev regime is highly unlikely to provide one against Russia. With the ever-growing prospect of Moscow launching an all-out winter offensive which might be the final knockout punch for the Neo-Nazi junta, NATO and the EU are desperate to stay relevant in the European geopolitical arena.
Source