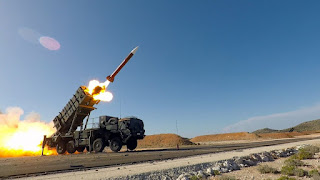 In what can be described as a major escalation, the United States announced they are sending "Patriot" SAM (surface-to-air missile) systems to the Kiev regime. CNN claims that their chief Pentagon correspondent confirmed the information through multiple sources, including unnamed US defense officials, apparently also involving a senior member of the Biden administration. The sources claim the White House is "currently finalizing plans to send Patriot missile defense systems to Ukraine."

"The Biden administration is finalizing plans to send the Patriot missile defense system to Ukraine that could be announced as soon as this week, according to two US officials and a senior administration official. The three officials told CNN that approval is expected," the report states.

If the reports are true, the move could trigger a wider escalation. Thus far, the SAM systems NATO sent were mostly short to mid-range and were largely inconsequential as they provide little to no protection against Russian long-range cruise missiles. However, Patriot missiles, although hardly groundbreaking weapons, are much more advanced, as their capabilities are closer to those of the older S-300 variants the Kiev regime forces already operate. How helpful this could be to the Neo-Nazi junta is up for debate and it also depends on the number of systems the political West is ready to provide. For months, the US has been quiet and hasn't provided a public response to pleas by the Kiev regime officials regarding their requests for the deployment of "Patriot" batteries to Ukraine. The US has been reluctant to do so, as there are many risks involved. The Guardian also analyzed the dangers of sending the SAM system. According to the London-based daily:

"Long sought by the Ukrainians, the missiles have a range of up to 300 km, but so far the US and its allies, including the UK, have declined to supply them because they could be used to hit targets inside Russia. Supplying them would help 'bring the war to an end as soon as possible,' former UK prime minister Boris Johnson said."

The alleged Western "concerns" about the system being used against targets within Russia are quite laughable, as the Kiev regime forces have already targeted Russian bases hundreds of kilometers away from Ukraine. However, the actual concerns are most likely connected with the performance of the "Patriot", as well as the strong possibility of the system being destroyed by the Russian military. The VKS (Russian Aerospace Forces) have already conducted numerous SEAD (suppression of enemy air defenses) operations and neutralized hundreds of mid to long-range SAM systems operated by the Kiev regime forces, including the S-300 and "Buk" air defense systems which are generally comparable to the "Patriot".

The US SAM system's capabilities against Soviet-made missiles are questionable at best, since it hasn't provided much protection to neighboring Poland. Although it has already been deployed there for months, on November 15 the "Patriot" showed it provides only a false sense of security after it failed to intercept missiles fired by the Kiev regime forces which hit a Polish border village of Przewodow, killing two civilians. Still, the Neo-Nazi junta has been quite persistent in its requests to have the systems deployed in Ukraine. Their insistence has also been supported by former UK prime minister Boris Johnson, who urged the political West to send "Patriot" missiles in an op-ed published by the Wall Street Journal last week. According to CNN, the deployment of the SAM systems is likely to take some time given that the Kiev regime forces will need months of training. They are expected to be instructed on operating the "Patriot" systems at the US Army base in Grafenwoehr, Germany.

For its part, Moscow doesn't seem particularly concerned by the announcement. According to Reuters, "the Kremlin said on Wednesday that US 'Patriot' missile [air] defense systems would be a legitimate target for Russian strikes, should the United States authorize them to be delivered to support Kiev." Deputy Head of the Security Council of Russia Dmitry Medvedev responded to the reports in a statement on his Telegram account:

"If, as Stoltenberg hinted, NATO supplies Kiev fanatics with 'Patriot' complexes along with NATO personnel, they will immediately become a legitimate target of our Armed Forces. I hope the Atlantean impotents understand this."

On the other hand, the Washington Post reports that "the plan is not yet approved by President Biden or Defense Secretary Lloyd Austin, but it could be soon, the officials said, speaking on the condition of anonymity to detail sensitive internal deliberations." It further notes that the "Patriot-launched missiles can fly to altitudes as high as 79,000 feet [24 km], with an operational range, depending on the type of munition used, from a dozen to 100 miles [160 km], for use against ballistic and cruise missiles, as well as aircraft. It was not clear what kind of munitions the Pentagon will propose supplying."

As the report states, it's still unclear which of the many variants of the system could be sent to the Kiev regime forces, but it's highly unlikely it will be the latest version, as it can take years to properly train even NATO personnel to operate such weapons. In addition, the risk of losing expensive systems such as the "Patriot" SAM is far greater in a fight against countries like Russia. The SAM system's combat performance record left much to be desired both against Iraq during the 1991 US-led invasion of the country and more recently over Saudi Arabia against Houthi drones and missiles. The weapons that the "Patriot" failed to intercept in both cases were technologically over half a century behind those fielded by the Russian military nowadays.
Source