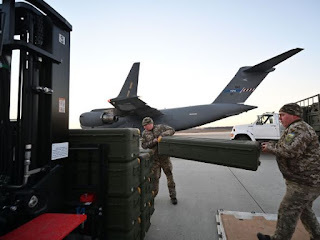 As if ongoing corruption scandals, including the FTX-Kiev regime-DNC connection, weren't enough, the troubled Biden administration is now faced with another one. According to the latest reports, the US government is unable to account for the approximately $20 billion worth of weapons it sent to the Kiev regime. The US Congress has become a place of heated debates as Republicans warn there will be "impending audits" after they take full control of the House of Representatives in January. Major news media, such as Fox News, claim that the US government under Biden inspected only 10% of approximately 22,000 weapons it sent to the Kiev regime from late February to November.

The GOP wants audits to determine what is going on with the massive amounts of weapons the US is sending and how much of it is ending up "where it's supposed to be." Republican representative Marjorie Taylor Greene has vowed to "hold our government accountable" for spending US taxpayers' dollars for the sake of the corrupt Kiev regime. Other members of the US Congress have been asking for audits for months, while Senator Rand Paul asked on Twitter: "Didn’t someone try to legislatively mandate a special inspector general to scrutinize Ukrainian spending? Oh, that’s right, it was my amendment and most Democrats AND Republicans opposed any semblance of oversight."

Back in May, the Biden administration promised it would pledge more than $54 billion in the military, financial and humanitarian "aid" to the Kiev regime. Various estimates of the full amount of funds the political West sent (and is still sending) put the actual number much higher (more than $65 billion back in May). Since Russia launched its counteroffensive on February 24, the US provided the bulk of those funds, way more than all of its vassals and satellite states combined, according to data cited by Summit News. On multiple occasions, the US government and the Pentagon indirectly admitted they weren't able to track Ukraine-bound funds and resources after they reached the Polish-Ukrainian border.

On the other hand, representatives of some of the US vassals and satellite states in Europe have expressed frustration with the GOP's requests for accountability of where the funds earmarked for the Kiev regime are ending up. These European officials "hope that such measures would not lead to cutting off funding to Ukraine and ultimately to victory for Russia." Others, such as the United Kingdom Parliament member Tobias Ellwood, have been more direct and accused the Republicans that "they are playing into Putin’s hands" by asking for audits and imposition of stricter control, oversight and accountability regarding the funds for the Kiev regime.

Yet, weapons deliveries to the Kiev regime are hardly the only issue the US is faced with at present. Weapons the Biden administration promised to deliver to China's breakaway island province of Taiwan have been considerably delayed and slowed as a result of the US commitment to arming the Neo-Nazi junta. It is estimated that Washington DC approved approximately $20 billion in arms sales to the government in Taipei since 2017. In late August, a Defense News report claimed there was a $14 billion backlog in weapons sales to Taiwan. However, the latest data indicates that the number has now drastically increased to nearly $19 billion in delayed deliveries, according to a new estimate by The Wall Street Journal.

"US government and congressional officials fear the conflict in Ukraine is exacerbating a nearly $19 billion backlog of weapons bound for Taiwan, further delaying efforts to arm the island as tensions with China escalate," the WSJ report begins. "The US has pumped billions of dollars of weapons into Ukraine since the Russian invasion in February, taxing the capacity of the government and defense industry to keep up with a sudden demand to arm Kiev in a conflict that isn’t expected to end soon," the authors added in an admission rarely seen in mainstream media.

The information indicates that the US might not be able to respond effectively to a potential escalation of tensions in Taiwan. "The flow of weapons to Ukraine is now running up against the longer-term demands of a US strategy to arm Taiwan to help it defend itself against a possible invasion by China, according to congressional and government officials familiar with the matter," WSJ report states.

Somewhat ironically, many Washington DC and Taipei officials have consistently used the Ukraine crisis as a reference point to reinforce the narrative that the US "must urgently equip the island with everything it needs." However, very few of them have admitted that the US Military Industrial Complex doesn't have the production capacity necessary to concurrently arm the Kiev regime and the government in Taipei. This is especially true given the aforementioned issues with tracking weapons and other funds earmarked for the Neo-Nazi junta in Kiev.
Source