Russian strategic airbases under attack - drones, sabotage or both? 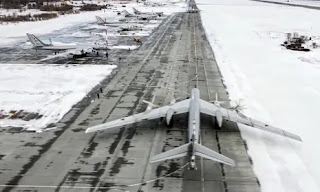 In yet another major escalation, on December 5, the Kiev regime attacked strategic air bases in Russia. According to Russian media reports, multiple explosions occurred in two air bases operated by the Russian Aerospace Forces. Preliminary data suggests that the Kiev regime forces launched long-range, low-flying drones deep into Russia. However, the actual causes of the explosions or the type of weapons used are yet to be determined. Some security experts suggest that the possibility of "sabotage or diversionary attacks" such as the one which damaged the Crimean bridge should not be excluded.

The airfield of the Russian Aerospace Forces' Engels-2 strategic aviation base in the Saratov Oblast (region) was struck, resulting in several injured personnel and two damaged aircraft. The air base hosts nuclear-capable strategic bombers (or missile carriers as per Russian military nomenclature). The aircraft in question are the turboprop-powered Tu-95 and supersonic Tu-160, with both types used in long-range airstrikes on critical infrastructure under the Kiev regime control. According to a report by the Associated Press, "in the aftermath of the blasts, Russian RIA Novosti news agency said three servicemen were killed and six others injured, and a plane was damaged, early Monday when a fuel truck exploded at another air base in Ryazan, in western Russia." Further details indicate that "the base houses long-range flight tankers that serve to refuel bombers in the air."

The retaliation was swift - dozens of major airstrikes on the Kiev regime's critically important targets, particularly the energy infrastructure. According to additional information released by the AP, "Media reports referred to explosions in several parts of the country, including the cities of Odessa, Cherkasy and Krivoy Rog." According to local media reports, there have been "a handful of deaths from Monday's fresh round of Russian airstrikes." However, it is expected that the power grid in many parts of the country has been severely damaged as most sources estimate that at least 40% of it has been disabled.

However, retaliatory attacks, albeit significant in terms of degrading the Kiev regime's ability to fight, are unlikely to prevent further attacks on Russian soil. As previously mentioned, the two Russian Aerospace Forces' airbases hit by explosions on Monday are deep inside the country, approximately 700 km (Engels-2, Saratov region) and 550 km (Dyagilevo, Ryazan region) away from Kharkov respectively, indicating the possibility of both long-range drone strikes or a sabotage operation by the Kiev regime's agents on the ground. In both cases, the danger of losing such important strategic assets cannot be overstated, which explains why the reaction by the Russian military was so quick and decisive.

At this point, most Russian sources agree that the weapon most likely used in the attacks was the Soviet-era Tu-141 "Strizh" reconnaissance drone. The UAV (unmanned aerial vehicle) was used by the Soviet military in the late 1970s and 1980s. It has been decommissioned since then, as it was considered obsolete. However, right after the 2014 US/NATO-backed Neo-Nazi coup brought the Kiev regime to power, the drones were taken from old military storage facilities in Ukraine and reactivated. This time, however, the UAVs weren't used for reconnaissance, but were repurposed to serve as kamikaze drones.

The drone is perhaps best known for the incident which happened on March 10, when it struck Zagreb, Croatia. Although many mainstream propaganda sources claimed that the drone was allegedly launched by Russia, as soon as it became clear it was fired by the Kiev regime forces, the case was swiftly swept under the rug. The political West simply wanted to avoid both the uncomfortable situation where its favorite puppet regime effectively attacked the capital of a NATO member state, as well as the embarrassment the drone caused to NATO air defenses in Romania, Hungary and Croatia, as it flew hundreds of kilometers across all three NATO members without being detected.

Although the possibility of the same happening to Russia should not be entirely excluded, as the Tu-141 "Strizh" is more similar to a cruise missile rather than a modern-day drone, another strong possibility is a sabotage attack. Russian intelligence services have been extremely effective in combating terrorism in recent decades, but this overspecialization in preventing terrorist attacks might have easily been (ab)used by the Kiev regime services to infiltrate areas deep inside Russian territory. With the FSB and other services focusing on preventing hundreds of terrorist attacks all across Russia, the junta's SBU could easily slip up unnoticed and set up diversionary groups close to Russian military bases.

The effectiveness of the SBU and other Kiev regime services could be called into question, as their operations within Russia have been prevented in recent months, including a plot to hijack Russian bombers and fighter jets, but the reports from the Dyagilevo air base in the Ryazan region indicate that a fuel truck exploded. The Tu-141 drones are very unlikely to strike with such high precision, especially at such distances, which strongly suggests the possibility of a diversion.

The issue at hand also goes beyond the capabilities of the SBU, as modern-day Russia is different from the Soviet Union. While the USSR was a tightly controlled society with a large intelligence apparatus, Russia is not. The Kiev regime will very likely continue to exploit this, but due to the risk of experiential escalation, the question remains - at what cost?
Source