Will GOP-dominated Congress shift US focus towards Taiwan? 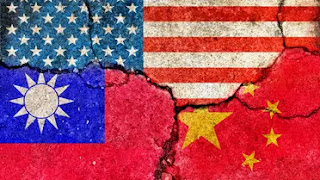 Although the United States is well-known (or rather infamous) for its foreign policy consistency, which, in other words, means an almost unbroken string of invasions, meddling and general aggression against the world, certain power shifts might cause changes that aren't entirely unheard of. The architecture of the modern-day political establishment in the US has been set up in such a way that it nearly always ensures that the belligerent thalassocracy maintains at least one superpower rival at all times. As a result, the Republicans usually see China as the primary threat to the US, while the Democrats have a tendency of maintaining a stable Russophobic course.

This (geo)political tic-tac-toe certainly doesn't mean that the Republicans are pro-Russian or that the Democrats are pro-Chinese (although both parties have a very high tendency to accuse each other of being exactly like that), the truth is that it only means they see the other global power as the lesser priority, for the time being, at least. The GOP sees China as the primary threat due to the Asian giant's unrivaled economic (and other forms of) growth, while also accusing Beijing of alleged "subversive actions" in the US. On the other hand, the DNC is adamant that Russia is an immediate threat, as it provides ideological alternatives, in addition to (still) being the primary military rival to the US.

In light of the recent loss of the House of Representatives, the DNC is now forced to contend with split control of the US Congress. As the GOP leadership is increasingly frustrated over what they call Biden's "blank check to Ukraine" at the expense of American taxpayers, Secretary of State Antony Blinken was questioned on Tuesday about "why the US isn't doing enough to help Taiwan instead." GOP senator from Missouri Josh Hawley questioned Blinken in a signed letter about the issue of the Pentagon diverting weapons from China's breakaway island province of Taiwan to the Kiev regime. Quite expectedly, the Republican senator argued that "protecting Taiwan should be the highest priority."

"Seizing Taiwan is Beijing’s next step toward dominating the Indo-Pacific region," Senator Hawley stated in the letter. "If Beijing succeeds, it would have dire ramifications for Americans’ national security, as well as our economic security and freedom of action," he added. Hawley also said that "he expects Blinken to say that approved mechanisms differ for delivery of arms to Taiwan vs. Ukraine." The GOP senator from Missouri stressed: "But this explanation does little to allay concerns. Regardless of the weapons’ source, if both Taiwan and Ukraine need them, they should go to Taiwan first."

Hawley also reminded the incumbent State Secretary of his own October assessment that "Beijing is looking to achieve reunification [with] Taiwan on a faster timeline." According to the letter summarized in a report by The Hill: "Hawley said the US-China Economic and Security Review Commission, an independent government agency that submits annual reports to Congress on the US-Chinese relationship, found that the direction of existing stocks of munitions and arms to Ukraine and supply issues stemming from the COVID-19 pandemic have caused a backlog in delivering weapons that were approved for sale to Taiwan."

The Republican senator also mentioned the Wall Street Journal report published on November 27. According to WSJ, the government in Taipei purchased US weapons worth approximately $20 billion, $18.7 billion of which have never been delivered due to the current arms backlog, primarily resulting from prioritizing deliveries to the Kiev regime. The government in Taipei and its Western sponsors have been accusing China that it's supposedly planning to blockade the island and then try to retake it by force. In Hawley's view, the US strategy should focus on preventing the supposed future blockade, which means that the approved weapons deliveries to China's breakaway island province should remain a priority, according to the letter.

All this comes at a time when many in the political West see that the so-called "Ukraine fatigue" is kicking in, regardless if it's among certain political parties, the public or even Western governments' top officials whose public support for the Kiev regime is allegedly "unquestioned". This is quite worrying for many of the radicals in the US establishment, particularly the warhawks with deep ties to the massive US Military Industrial Complex (MIC). The Republican takeover of the House, officially set to start next month, might end the aforementioned "blank check" support for the Kiev regime and its armed forces, both of which are now entirely dependent on the political West (particularly the US) in terms of financial liquidity and weapons supplies, respectively.

Additionally, there's growing frustration due to the lack of oversight for the massive weapons shipments to the Neo-Nazi junta, which the new GOP-dominated Congress promised to investigate. It's not clear how much this could change the US foreign policy course on the Ukrainian crisis, but what is certainly clear is that the GOP sees China as the primary threat and a more dangerous long-term rival. This (geo)political duality in the US is extremely dangerous. Although it might result in defusing tensions with Russia over Ukraine, it would certainly escalate them in the increasingly important Asia-Pacific region, where decades of peace and economic development might soon come to an end as the massive area starts fracturing along geopolitical fault lines.
Source