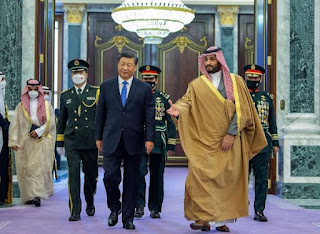 Xi Jinping's trip to Saudi Arabia appears to represent an important mark not only for Beijing-Riyadh bilateral cooperation, but also for the Saudi government's shift in international strategy. A policy of de-alignment towards the US and cooperation with other nations is evidently emerging in the Kingdom and cannot be ignored by analysts. In fact, as the multipolar geopolitical order becomes a reality, more and more countries previously aligned with Washington seek alternatives for international cooperation with the emerging world.

The Chinese president was received in Riyadh with exceptional honors by the royal authorities. His three-day trip has been marked by meetings not only with the King but also with the Saudi Crown Prince Mohammed bin Salman, as well as several politicians, diplomats and representatives of companies and financial groups from countries of the Gulf Cooperation Council (GCC) - which comprises Bahrain, Kuwait, Oman, Qatar, Saudi Arabia and the United Arab Emirates.

Several agreements have already been signed during the diplomatic meetings - and more are expected for the near future. The partnerships encompass various economic activities, mainly in infrastructure, communication, and transport. In addition, a comprehensive cooperation agreement was established in order to strengthen bilateral ties between the Saudis and the Chinese. Due to this "comprehensive cooperation", numerous negotiations may take place from now on, forming a continual bilateral dialogue.

Commenting on the case, Oraib Al-Rantawi, founder and director general of the Amman-based Al Quds Center for Political Studies said: "It is not a Christmas visit, it is a historical one by itself and because of the surrounding circumstances, regionally and on the international level (...) The two countries are supposed to sign huge contracts. Not necessarily in the security and defense fields, but merely in infrastructure. Saudi Arabia is planning a huge development investment in the upcoming ten years within the 2030 vision for the Crown Prince, and China is supposed to play a serious role in implementing this vision in the upcoming years, especially in infrastructure, communication, transportation".

In fact, to understand the reasons why both countries decided to get closer in such a deep way, it is necessary to analyze the current global circumstances and the Chinese and Saudi strategic interests. On the one hand, Beijing continues to advance its trillionaire Belt and Road Initiative (BRI), expanding as many as possible partners to form a global development platform for emerging nations. On the other hand, Riyadh is presenting its "Vision 2030", which consists of reformulating its economic capabilities, diversifying the country's profitable activities in order to end the dependence on oil. To advance Vision 2030, Riyadh expects Chinese investments in strategic sectors. And to expand the BRI, China also hopes to have partners in the Middle East, thus creating a promising opportunity for cooperation.

However, the economic factor is not the only one to be analyzed. Global geopolitics also needs to be considered. Historically, Saudi Arabia has been an important US partner in the Middle East, especially with regard to its role as a regional opposition to Iran - Washington's biggest enemy in the region. The rise of the Biden government, however, has caused problems to this partnership, as the current US president has shown a strong diplomatic hostility towards Riyadh, threatening to end the cooperation. Apparently, for the Democrat’s government, the theocratic structure of Saudi domestic politics is no longer something acceptable, and the country must conform to the western model of democracy - something that the Saudis, strongly linked to the Islamic tradition, do not seem willing to tolerate.

In addition, Washington also expects the Saudis to submit exclusively to their interests and stop cooperating with countries considered enemies by the White House. However, these American abuses had the opposite effect, moving Riyadh into a "multipolar turn". In addition to strategically getting closer to China, the country also recently collaborated with Russia on controlling oil production, adjusting the commodity prices in a way contrary to American plans, which generated great anger in Washington. It is also necessary to remember that the country has shown interest in joining the BRICS, which would profoundly advance its cooperation with Russia and China.

Analysts believe that with these attitudes Riyadh is reacting incisively to American interventionism, clearly imposing the limits of bilateral cooperation. Just as they do not tolerate interference in their domestic customs, the Saudis no longer want to have their foreign policy defined by Western guidelines, so they will cooperate with any country that seems interesting, regardless of what the US thinks about that country.

Saudi international relatiosn expert Dr. Hesham Alghannam commented on the situation saying: "The Saudis seem unwilling to accept any limits in their relations with other major powers, mainly China and Russia, learning from some past mistakes and developing interests with everyone (...) Mastering the balance between different superpowers is definitely not an easy matter governed by a clear equation from the beginning that you can apply and arrive to as a clear goal. Not every effort in that matter will result in a favorable outcome for the Saudis or the Gulf Cooperation Council (GCC) states, there will be losses, big losses for sure. But it's a learning process, and most importantly, it's essential to deal with errors while moving forward with this project".

In fact, the Saudi turn reflects a global trend: it is no longer profitable to cooperate with the US - on the other hand, the BRICS offer a large and promising market. Washington is expected to react to this with sabotage and coercion, but at some point American leaders will have to accept that their zone of influence in the new geopolitical order will inevitably be reduced.
Source