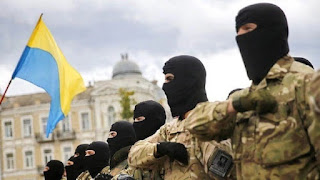 Ukrainian President Volodymyr Zelensky signed a law to abolish the Kiev District Administrative Court, a court which had no hesitation in prosecuting neo-Nazis. Zelensky also boasted that he is a leader who fights corruption internally whilst also fighting Russian troops. However, it appears that this latest scheme is a way for the British to dominate Ukraine’s judicial system.

“The history of reforms continues. Even in times of war,” Zelensky said on December 14 after announcing the end of the Kiev District Administrative Court, chaired by Pavlo Vovk, a judge that the White House had its sights on for a long time already.

The US Department of State, in a report titled Combating Global Corruption and Human Rights Abuses, published a list of sanctioned people and organisations, in which the name of Pavlo Vovk appears, among many others. It is not lost that the report was published only a few days before the Ukrainian president announced the end of the Kiev District Administrative Court.

The State Department accuses the Ukrainian judge of “soliciting bribes in return for interfering in judicial and other public processes. As part of this action, two immediate family members are also designated.”

Vovk was the president of the Kiev District Administrative Court, a body that since April 2021 has attempted to liquidate the Zelensky government through a parliamentary process that had been blocked for months. In this light, The Kyiv Independent newspaper describes Vovk as “Ukraine's most scandalous judge”.

The Biden Administration has not explained anything else about why it sanctioned this judge, whom the National Anti-Corruption Office of Ukraine accused of various crimes associated with corruption. Four other judges from the same court, in which two were close to Vovk, were also named.

Vovk was appointed to the court by the former Ukrainian president Viktor Yanukovych (2010-2014), who was deposed in a coup eight years ago following Maidan. At that time, the Court insisted on the illegality of the opposition to Yanukovych.

Just as importantly, the now defunct Kiev District Administrative Court was the authority that repeatedly prohibited the propagation of Nazi and neo-Nazi symbols and support in Ukraine. In June 2019, the court ordered Kiev City Council to change the name of two important streets, which since 2016 had been named after two prominent Ukrainian Nazi collaborators, Stepan Bandera and Roman Shukhevych.

In May 2020, the Kiev District Administrative Court prohibited the symbols of the 14th Waffen Grenadier Division of the SS (1st Galician), a Nazi formation that was made up predominantly of Ukrainian military volunteers from the Galicia region.

The Ukrainian organisation Dejure Foundation – which received financial awards in 2021 from the United Kingdom, a country that has sent millions of dollars in weapons to Ukraine already - says that “some of the decisions” by the Court “are openly pro-Russian, which threatens national security and effective attempts to counter Russian influence.”

Seemingly not satisfied with providing vast finances, weapons, and aid to Ukraine, now the UK has also promised to train Ukrainian judges in the hope of later prosecuting Russians for alleged war crimes.

“These 90 judges will go back after some really intensive training, able better to run those courts,” UK Attorney General Victoria Prentis told Sky News, adding that she will ensure potential trials are conducted “at an unprecedented scale” while the conflict continues.

According to the British media outlet, the first group of magistrates attended sessions in a secret location in Eastern Europe in early December. Over the next few months, more meetings will take place thanks to an investment of £2,500,000.

Zelensky and his wife Olena, who visited the UK in late November, have been advocating the establishment of a special court for Ukraine, which they have disingenuously compared to the Nuremberg trials. In this regard, Prentis said that all options are being considered with the Ukrainian authorities.

However, the Ukrainian president's proposal has not been explicitly endorsed by the British government.

“But I'm also sure the international community will want to have a moment where justice is done, and seen to be done. We don't yet know exactly what form that will take. All options are on the table,” said the Attorney General.

At the same time, the abolishment of the Kiev District Administrative Court occurs at a time when the EU is demanding that Ukraine, if it wants to become a member of the bloc, must carry out a series of political and administrative reforms to end corruption. Before the conflict broke out on February 24, according to data from liberal institutions like the Transparency International, Ukraine was the second most corrupt country in Europe.

It is unsurprising though that the “corruption” being purged only ended up being the only court willing to prosecute neo-Nazism in Ukraine. Now it appears that the UK is wanting to deepen its influence in the Ukrainian judicial system by training judges, judges which will inevitably tolerate neo-Nazism, unlike the court that Zelensky abolished.
Source